DINOSAURS – “Big John” hasn’t revealed all of his secrets. The famous Triceratops, sold at auction on October 21, 2021 for a record €6.6 million (see video above), was recently studied by researchers. They conclude that this dinosaur was probably involved in a fierce fight in the months before it died.

Published this Thursday, April 7th in the magazine Nature, this new study focused on the various injuries present on the skull and collar of “Big John”. After analysis, the researchers found that they probably occurred due to a fight with a relative, which could lead to his death.

But that’s not all. This discovery also answers several questions about dinosaur healing. Based on their findings, the researchers do argue that the mechanisms underlying the repair process in these giant reptiles appear to be similar to those in mammals.

“Big John” is not a stranger. A real star in the world of fossils, this is the most famous of the Triceratops. From its non-scientific Triceratops horridus, it is a species of horned dinosaur characterized by a large frill on the back of the skull, formed in particular by the cranial bone, the squamosal. It has been suggested that this bone collar served as protection against injuries sustained during combat, whether from predators such as the famous Tyrannosaurus rex or many other congeners.

Deriving its name from its large size, Big John is indeed the largest Triceratops fossil ever discovered, 5-10% larger than other known fossils. It is also one of the best preserved, with 60% of its skeleton found, including three quarters of the skull.

Thus, this paleontological treasure is a treasure trove of information discovered by Ruggiero D’Anastasio and his colleagues. After examining the Triceratops skull, they analyzed the trauma marks present on the fossil. In particular, a keyhole strike in the right squamosal (characteristic of some vertebrates and forming the famous Triceratops collar). 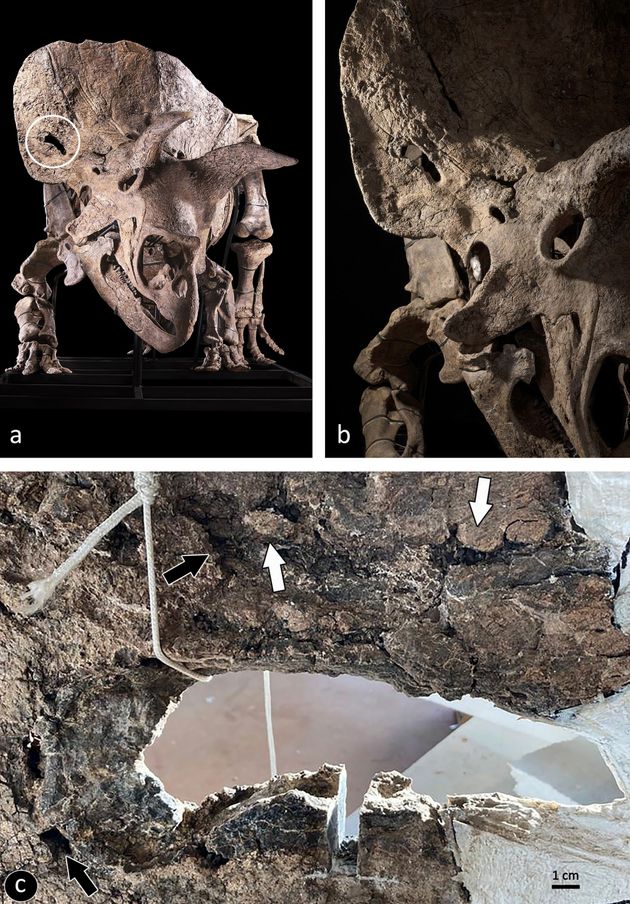 The fossil of Big John shows damage to his collar, which may have been one of the causes of his death.

After analysis, the researchers concluded that this was the result of a traumatic event that could have occurred during a fight with another relative. However, the animal did not die instantly. Indeed, chemical analysis revealed the presence of substances that are found in the healing phases of a bone injury. Microscopic analysis revealed newly formed and healing bone with typical signs of a bone remodeling phase.

With these elements, the researchers found many similarities between the healing processes of dinosaurs and mammals. However, the recovery was incomplete, as the bone surface at the site of injury is uneven and has plaque-like bone deposits. These elements are indicative, research shows, of the result of inflammation (or possibly infection).

However, it is difficult to be sure that this is the cause of the death of “Big John”. Nevertheless, it confirms the hypothesis put forward in the second half of the twentieth century that the Triceratops family, ceratopsids, must have been a fighter, fiercely opposed to their relatives.

See also HuffPost: This flying reptile is the largest ever discovered in the Jurassic.