After just 18 months of operation, the #Community building was inaugurated this Friday, April 15th, in Mérignac by key stakeholders in the presence of Alain Anziani, Mayor of the City and President of the Metropolis. The three-story building, built by promoter Cogedim, was acquired by real estate asset management company Atream for 60 million euros. And it is the Groupama insurance group that is renting 85% of the space in order to bring together all its Bordeaux teams from June, which are now divided between Mérignac, the center of Bordeaux and Lake Bordeaux.

“More than 730 employees will join the site between June and December, and in the long term we should increase the number of employees to more than a thousand. Given the remote work two days a week, the flexible office principle is applied. [sans bureau attribué à chaque salarié, NDLR], and 15% of the area is reserved for meeting rooms. A share that could easily rise to 25%.”explains Eric Donnet, CEO of Groupama Immobilier.

The H-shaped building covers an area of ​​more than 15,000 m2 on three levels, behind which there is a car park in places. From this autumn, it will be served by the extension of the line A of the tram to the airport. “The building is designed to be trimmed, adjusted and maneuvered, with each wing able to operate independently. A special place in it is occupied by open and green areas with an area of ​​more than 5,500 m2 and natural light.”emphasizes Pascal Mongereau, director of corporate real estate at Cogedim in the west of France.

Landscaping of all floors

The office floors have a see-through effect and are particularly bright thanks to large bay windows and 250 m2 balconies. The roof terrace of 450 m2 is the decoration of the whole house. “The goal is for employees to be able to see natural light, sky, trees and the rhythm of the seasons at all times in a manner consistent with the principle of biophilic architecture.” adds Frédéric Didier, Associate Architect of Hubert Godet Architectes.

“Biophilia is the connection between man and nature.”explains Solene Burel, Regional Director of Environmental Research at Sinteo. “Concretely, the idea is to perpetuate biodiversity with the building through different layers of vegetation: grass patches in the ground, green façades and rooftops, birdhouses, etc.”

Thus, on the roof of the building, the vegetation turns into a “brown roof” on half of the surface, that is, on 2500 m2. “Different natural spaces are arranged there to recreate the biodiversity that existed before. You will find insects, birds, reptiles, amphibians and even fish in the pools set on the whole”describes Solene Burel. 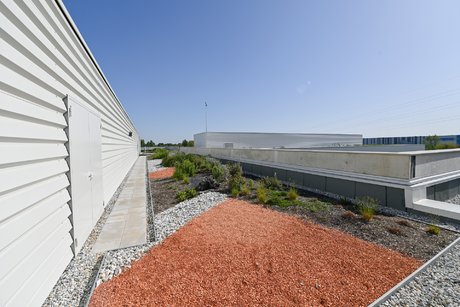 A very thick green roof that also acts as thermal insulation. In this regard, the office building has received several certifications with the aim of having a thermal performance 30% higher than in the current RT 2012.

This new building also includes several blocks of materials reused as part of the “Reuse Booster” program launched in 2020. Mobius Réemploi provided 2,800 m² of recycled floors, as well as almost 600 m² of carpet and 85 m² of tiles and gratings. Half of the paint used was provided by the Bordeaux company Circouleur. Finally, “Some of the furniture comes from the Landes pine forests owned by Groupama in the Gironde and the region. The wood is cut in Cesta and the furniture is assembled in Bordeaux-Lac with wood tracking for each piece.”says Eric Donnet.