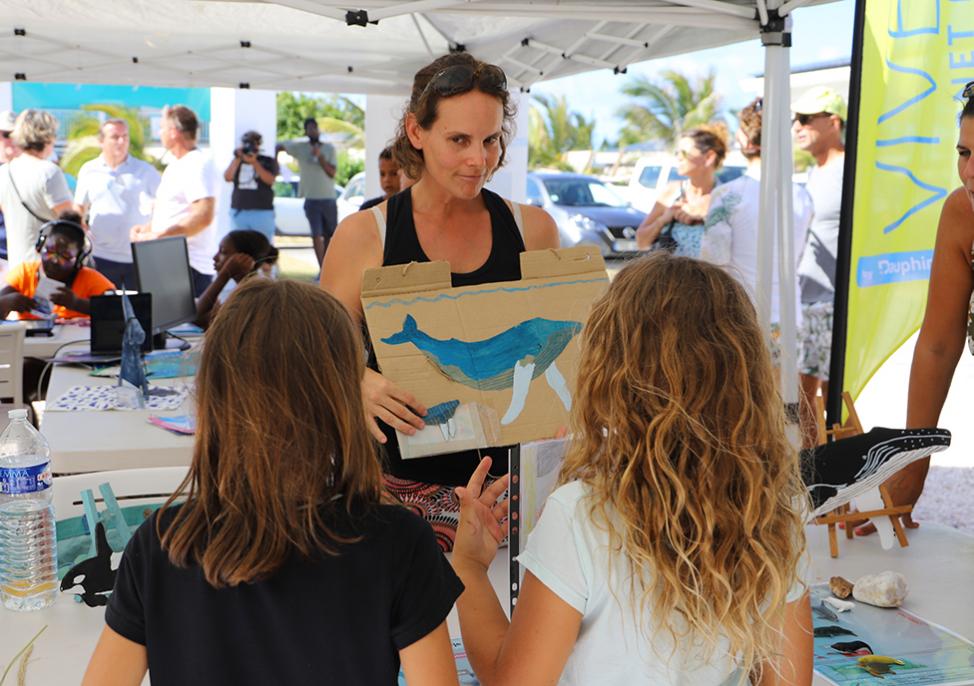 On Sunday, April 3, the first Whale Festival took place in the village square in East Bay. Whale protection associations have come together to raise awareness among the public, young and old, about animals that are sometimes in danger. For several activities, such as painting or sound and visual immersion, each is distributed with the best knowledge of our giant friends.

11-year-old Timothy loves whales. On Sunday, he went to the Whale Festival on the advice of his teacher, with whom he cleans and guards the Galion Marine Educational Zone. At the Agoa booth, Timothy dived into the depths of the ocean to hear the sounds of whales and other marine mammals. “It’s also important to talk about whales because they are marine mammals that we have to respect, for example by staying away from them.” He looks forward to meeting them someday, as does his caregiver Evelyn, who says she is ‘impressed’ with these ‘big beasts’: being blue giants.”

After the sound immersion comes the visual immersion offered by the reserve. In the square, the public dived into the coral reef during the day to show the ecosystem, which is difficult to access except for divers. The event caused a sensation among the “200 participants” of the Reserve, especially among children, who were able to explain the human dependence on these ecosystems: “Looking at them, the children are amazed at the discovery of the seabed. “, – explains Vincent, an employee of the reserve.

At the end of the day, 130 children were able to attend a conference about the lifestyle of the whale, its features and the means by which everyone can protect them. Around 6:00 pm, the adults were able to study this mammal in more detail, along with scientists such as Michel Vely, a marine mammal veterinarian. “Some didn’t know that in Saint Martin we protect and educate the public about whale watching. There are even people who did not know that whales live here. This allows Saint Maarten to be positioned on a map of whale watching islands and where programs run on humpback whales. We still rank second in the Caribbean for the number of humpback whales,” concludes Michel Veli. The best table of Saint Martin To whet the appetite of the whole island and showcase the talents of the restaurateurs of Saint Martin, the Tourist Office, the organizer of the event, invites establishments wishing to “design a special dish or a complete menu based on a local ingredient: tamarind”… On Saturday, October 9, the first Learning Forum took place in Marigot. “The social position of Saint-Martin is special. 30% of the population is under 25 and 40% of these young people are unskilled,” explains Marie-Laure Lakitain from the Department of Economy, Employment, Labor and… The Get Up Clean Up contest brought together over 200 participants

Give your time and participate in the cleanliness of the territory in communicative cheerfulness. These were the motives of the 40 teams that took part last Sunday, November 14th, in the great cleansing of the French part of the island. Participants collected at least 1894 bags. This is more than during… COVID-19 / Evolution of covid-19 measures The latest public health data from France confirms a decrease in the number of covid positive cases in Saint Martin. However, even if this trend has begun, the Prefect of Saint-Barthélemy and Saint-Martin calls for the greatest caution. 12 people died in…