Researchers from Tel Aviv and Naples Universities found that brain size allowed some large animals, such as elephants, rhinos, hippos and kangaroos, to adapt to changes over tens of thousands of years and survive major phases of extinction.

They found that surviving species have, on average, 53% larger brains than closely related but extinct species of the same size.

Professor Shay Meiri from the School of Zoology, Tel Aviv University and the Museum of Natural History. Steinhardt said: “We hypothesize that mammals with large brains were able to adapt their behavior and cope better with changing environments – mainly human hunting and possibly climatic changes that occurred during this period – compared to mammals with relatively small brains. »

Receive our free daily newsletter by email so you don’t miss any of the best news. Free registration!

During the last ice age there was a mass extinction of large animals on all continents except Antarctica.

The researchers looked at a gap of about 120,000 years, from the beginning of the last ice age, when modern humans began to spread across the world using deadly weapons, to 500 years ago.

They turned to the paleontological literature to collect data on 50 extinct species of large mammals, from the extinct giant needle anteater weighing 11 kilograms to the straight-tailed elephant, whose remains were found in Gesher Bnot Yaakov in northern Israel, which weighed 11 kilograms. tons.

They then compared the size of each animal’s meninges with the brains of 291 evolutionarily related mammals that survived and still exist. 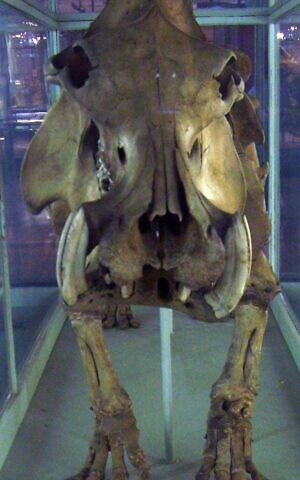 The skeleton of an extinct hippopotamus, Hippopotamus lemerlei, at the Nature Museum in Berlin. (Source: FunkMonk, CC BY-SA 3.0, Wikimedia Commons)

The weight of the latter varied from 1.4 kg (platypus) to four tons (African elephant).

“Previous studies have shown that many species, especially large ones, have become extinct due to overhunting by humans who have entered their habitat,” said Jacob Dembitzer, a doctoral student at the University of Naples who led the study.

“We know that most of the extinctions were due to large animals, and yet it is not clear what distinguishes the large extant species (which still exist) from those that have become extinct. »

Professor Shai Meiri states that “We hypothesized that the behavioral flexibility afforded by large brains relative to body size gave the surviving species an evolutionary advantage—it allowed them to adapt to the changes that have taken place over the past tens of thousands of years. including climate change and the emergence of humans.” 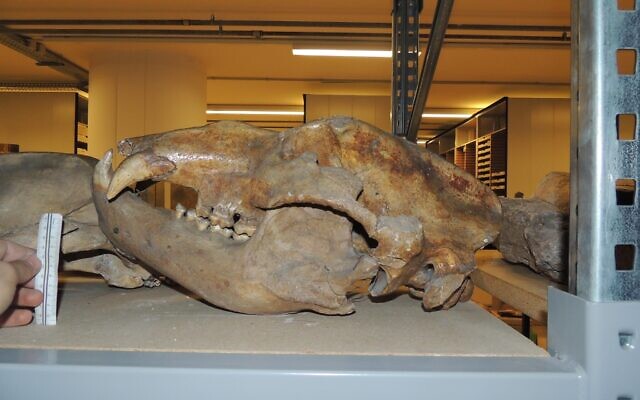 The skull of a cave bear (Ursus spelaeus), a species that was included in the study. (Courtesy of Dr. Luca Pandolfi, University of Florence)

In Australia and South America, the extinction was especially severe. Today, red and gray kangaroos are Australia’s largest native animals. In South America, these are guanaco and vicuña (similar to a llama, which is a pet), as well as tapir.

The researchers found that the large mammals living on these two continents had relatively small brains.

Professor Pasquale Raia and PhD student Silvia Castiglione from the University of Naples were also involved in this study, which was published in the journal Nature Scientific Reports.

You are one of our regular readers!

We are glad you are reading. X items from Israel Times last month.

This is what we work for every day: to provide astute readers like you with up-to-date media coverage of Israel, the Middle East and the Jewish world. Unlike many other sources, our content is available for free – no paid access pops up from the first paragraph. But our work is getting more and more expensive. That is why we invite readers who can and for whom Israel Times in French has become important to support us by joining Community Israel Times In French. For the amount of your choice, once a month or once a year, you too can contribute to this quality independent journalism and enjoy ad-free reading.