Ichthyosaurs, plesiosaurs, mosasaurs and other superpredators inhabited the seas more than 60 million years ago. What are these reptiles, which are often mistakenly called “marine dinosaurs”? Visit to the gallery of “monsters” with three authors “La mer au temps des dinosaurs”.

How many marine reptiles lived in Mesozoic, when dinosaurs ruled the earth? And how many are there today?
Natalie Barde. In the Mesozoic (from -252 to -66 million years ago), there were at least five hundred species belonging to ten orders of reptiles. Moreover, every year we open new ones. Currently, among the so-called “marine” reptiles, there are only crocodile, lizard, a few turtles and snakes.

The word comes from reptile, “who crawls” in Latin. Ancestors marine reptiles were terrestrial, right?
N.B. Yes all. Then, in the Mesozoic, they turned to the sea, as well as much later, in the Tertiary era, mammals such as cetaceans and sirens. This return occurs after the Permian-Triassic crisis. Occurring 252 million years ago, 95% of animal species disappeared. Thanks to this extinction, the reptiles are “thrown into the water”!

Alexandra Husey. Like all crises, the Permo-Triassic crisis leaves empty ecological niches. Predators and competitors are almost gone. In such conditions, it is easier to diversify and multiply! After this extinction, a phase of radiation sets in, and new species appear very quickly.

It is assumed that placodonts fed by burrowing to the bottom of the sea in search of invertebrates.

Do we know who their earthly ancestors were?
Peggy Vincent. Not always. For example, when the iconic group of ichthyosaurs appears in the fossil record, these animals are already so modified that it is difficult to find their terrestrial ancestor.

OH. For some groups, on the contrary, we clearly see evolution. For example, the first mosasaurs looked like monitor lizards. They still had legs instead paddles for swimmingCloseThe end part of the limb is flattened, full and rounded, resembling the end of an oar. and their compact bones prove that they were slow swimmers at shallow depths. They then became active swimmers; their elongated tail allowed them to move, their legs became paddles for swimming, and their skeleton became lighter. These changes happened very quickly, in just a few million years.

Did marine reptiles occupy all links of the food chain?
N.B. Of the approximately five hundred known species, only one fed on aquatic plants. All the rest were carnivorous and fed, depending on the species, on mollusks, crustaceans, fish, and those that were older, on other marine reptiles. Basically we had small predators, large predators and huge predators. Thus, they were at the top of the food chain.

What were the main adaptations that allowed reptiles to conquer the sea?
P.V. First, to be able to move around in the water, be agile enough to feed and float to the surface to breathe. Everyone has adapted in their own way, even if we find common ground. Most of the limbs have become paddles for swimming. The most hydrodynamic form is the ichthyosaurs, large cruisers found in all seas. Basically, they were equipped with a dorsal fin and a bilobed tail, like modern sharks or tuna. 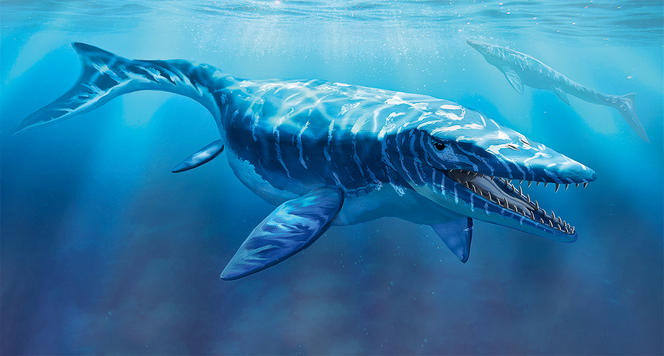 Jaws with knife-sharp teeth, a palate with curved teeth like hooks, the Mosasaurus was a formidable mega-predator.

What other changes have they made?
N.B. There are a number of physiological, morphological and behavioral adaptations. In addition to what Peggy just mentioned, there is an example that I really like: nostrils. They are no longer at the end of the snout, as in lambda reptiles, but rise towards the forehead. This is the same evolution as today’s cetaceans: the anus of dolphins and whales is actually their nostrils.

PV Their thermophysiology has also changed. Modern marine reptiles live in seas with pleasant temperatures. However, some Mesozoic reptiles have been found near the poles. Analysis isotopesCloseAtoms with the same number of protons but different numbers of neutrons. Therefore, they have the same chemical properties but different physical properties. For example, carbon-14, an isotope of carbon, is radioactive and is used in dating methods. The oxygen stability of the bones indicates that they could have had a high body temperature, up to 35-36°C in plesiosaurs and ichthyosaurs.

Oh These results are consistent with data obtained from the analysis of the nature of their bones, which is also a good indicator of physiology, since it varies depending on whether the animals are cold-blooded or warm-blooded. We distinguish between slow-growing bones, which belong to species with a low metabolic rate, and fast-growing bones, in animals capable of producing body heat. The bones of ichthyosaurs and plesiosaurs have characteristics similar to those of birds and mammals in this respect, and therefore indicate a very active metabolism.

This is amazing. We always think of reptiles as cold-blooded animals…
NB True, but take an ichthyosaur that crossed vast expanses of the ocean. He couldn’t wait like a lizard to bask in the sun every morning before he got to work!

And for reproduction, what devices were there?
NB Many land reptiles are oviparous: they lay eggs. But in the vastness of the ocean it is difficult. Large marine reptiles cannot return to shore to lay their eggs because they risk running aground like whales. And laying only a few eggs with a hard shell in the water is also impractical. Marine reptiles then developed a type of live birth in which the egg is no more, but the calf emerges fully formed from the mother’s womb. This live birth is acquired very quickly. Thanks to exceptional fossils, we were able to see that in the first ichthyosaurs of the Triassic, the baby crawled out head first. But in an aquatic environment, this is not ideal, because by the time the rest of the body comes out, it may drown. In later ichthyosaurs, the tail comes out first, as in modern cetaceans. I find this change in the way of reproduction extraordinary!

Exceptional fossil of a female ichthyosaur and her embryo expelled at the time of death (Holzmaden deposit, Germany).

Did they raise their babies?
NB It is hard to say. These animals are so different from living reptiles that they cannot be compared with them. Hypotheses concerning the behavioral domain are difficult to demonstrate when working with fossils.

PV Often the difficulty is that we have very few fossils. As for plesiosaurs, we only have one skeleton of a mother with a fetus in her abdomen, so it’s hard to generalize. But one can imagine that if she had only one, then she would have to fight it more intensely. This idea is based on hypothetical models of reproductive strategies: according to strategy R, we “bet” on a number, and according to strategy K, on ​​the contrary, we have few cubs, which we take care of a lot.

OH. A recent study of the bone structure of a plesiosaur embryo suggests that they gave birth to one large offspring.

66 million years ago a meteorite fell, signaling the end of the dinosaurs and the Cretaceous-Tertiary crisis. What does this lead to in marine reptiles?
P.V. At the end of the Cretaceous, major upheavals do occur. Before the fall of this meteorite, very strong volcanic activity also began in India, two phenomena that shook the planet. Not all reptiles reacted the same way. Some disappeared, like plesiosaurs and mosasaurs, while others passed the crisis, like turtles and crocodiles. What needs to be studied is the state of the populations before the crisis, to see if the groups died out gradually or if it was like a blow. In the fossil record, we see that mosasaur and plesiosaur populations were distributed across the globe and were very diverse shortly before the crisis. So we think of a sudden disappearance.

Do we know why some survive and others don’t?
NB The crisis is selective. The trend is that smaller animals not directly related to primary production, such as scavengers, resist better. But there are also counter examples, such as sea turtles, where we do not see a drop in biodiversity. With the current state of our knowledge, it is still difficult to say why some survive and others do not undergo mass extinction.

The long-necked Elasmosaurus excites the imagination: some dreamers believe they saw it in the muddy waters of Loch Ness…

Finally, among this variety of extinct species, is there one that is closer to your heart?
P.V. I loveelasmosaurus. It is a species of plesiosaur with a giant neck. We see a multiplication of vertebrae, up to seventy in the neck, with a very small head at the end.

N.B. For me it would be Mosasaurus. It looks like a giant sea lizard. The smallest of this family are three meters tall, the tallest, like him, are fifteen meters tall. They were first described by Georges Cuvier, the father of paleontology.

Oh If I had to choose, I would name placodonts, animals endowed with a shell, but having, however, nothing in common with turtles. Everything leads us to think that they were slow, heavy animals that crawled along the bottom and fed on shells. However, when we look at their bones, we see rapid growth, indicative of a high metabolism. There’s something wrong here, a mystery. If I had to resurrect one of them, I would choose a placodont because I don’t understand them. ♦