On the side of the road, motorists can’t believe it. Cars froze, some grabbing smartphones to commemorate the scene: six horse-drawn trailers slowly move down a side road lined with fields. It’s not yet 11 o’clock, and the sun is already scorching. Here and there a few oak trees provide welcome shade for the animals and their guides.

This unusual convoy belongs to Bidon’s circus. Since 1976, the troupe has toured the roads of France and Italy. François Rolin, known as “ François Bidon »is one of its founders: he sits in front of the first caravan and goes ahead.

Until September, the circus will travel through the Center-Val-de-Loire region, crossing the Indre, Cher, Nièvre, Allier and Creuse. © Mathieu Genon/Reporterre

He impresses, François, with his long gray hair and a somewhat rough look. “ In the 1970s I worked as a bronze engraver in Paris. I dropped everything to travel »says a 75-year-old man with sparkling blue eyes. Along the way, he met a former balloon artist who lived in a forest in eastern France. It was this love story, like a fairy tale, that made him want to start a circus. “ old » with horses and caravans. And this despite the fact that he had no experience in this area. 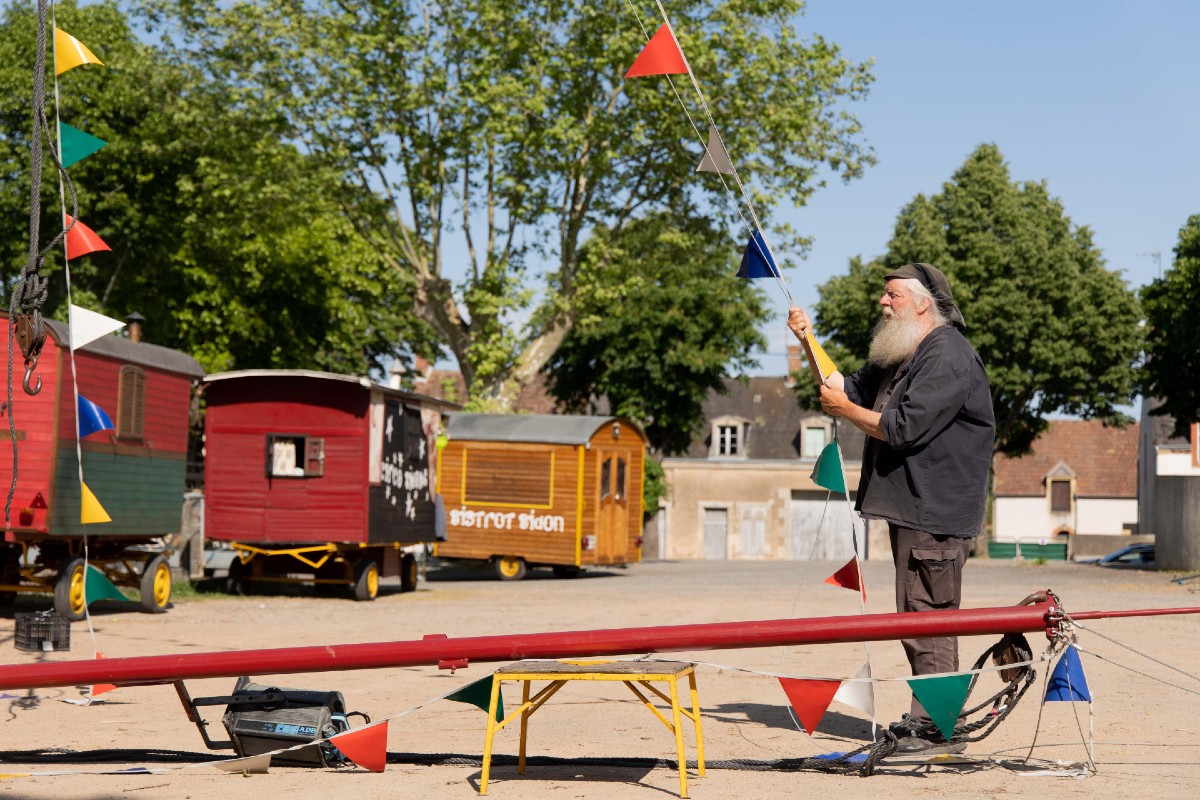 François Rolin, known as François Bidon On the road since 1976. © Mathieu Genon/Reporterre

love story finally ended, but the thought did not leave him. François was back on the road and formed his troupe from pairs of musicians he met on the trip and his new companion. He bought some horses and made trailers himself. A group of self-taught friends learned different numbers at work. “ We couldn’t even juggle three clubs, people were dying of laughter. They laughed more than in a traditional circus »laughs François. Hence the name “ candy circus »which has remained ever since.

Forty-six years later, having traveled thousands of kilometers, the troupe has changed a lot. The group of friends dispersed, new acrobats came, they came, they left. This year the group (a dozen people) has been completely renewed. This time, no amateurs, most of the artists graduated from circus schools or conservatories. “ But we do not put forward the technique, we do not pretend to be the bestFrancois points out. We want to surprise people, touch them. » 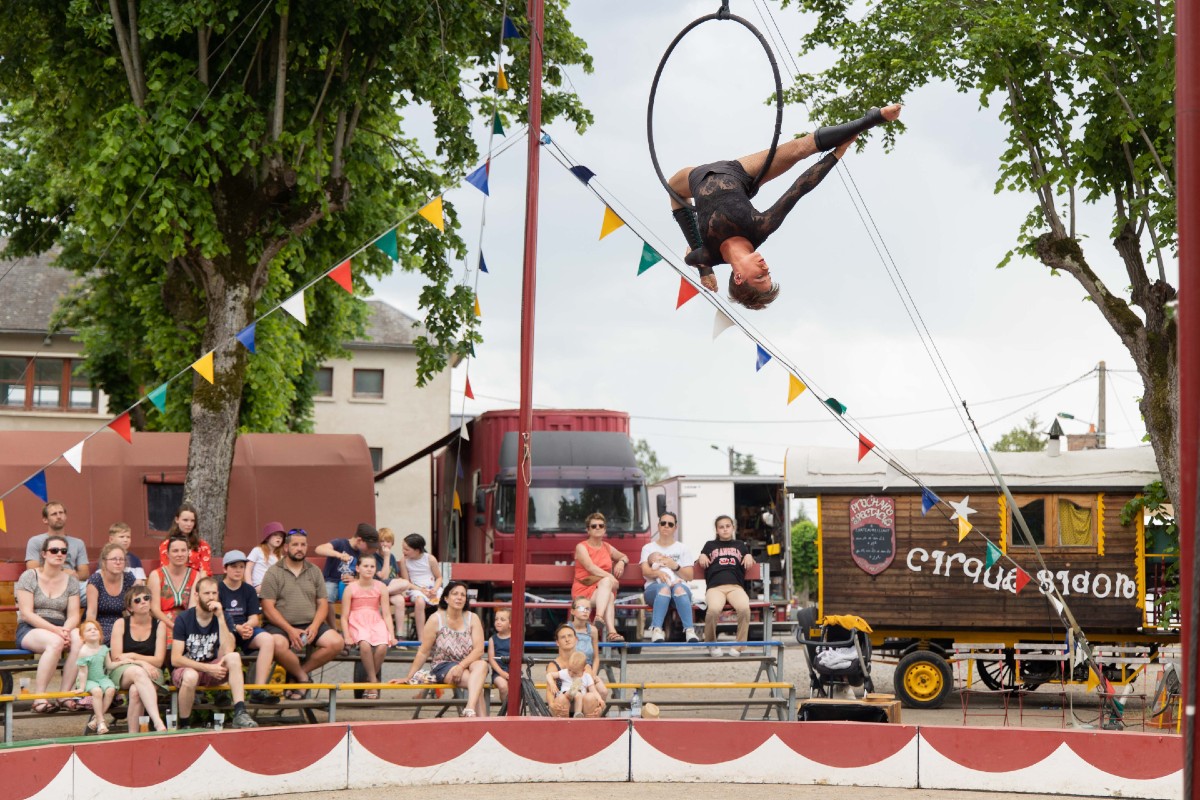 This year, until September, the Bidon circus will travel through the Center-Val-de-Loire region, crossing the Indre, Cher, Nièvre, Allier and Creuse. The pace of the tour is determined by the pace of the horses: they cover a maximum of 25 kilometers per day and stay in the same city for several days. Equipment too heavy for them or too bulky for trailers is transported upstream by truck. A rhythm that makes us celebrate slowness. 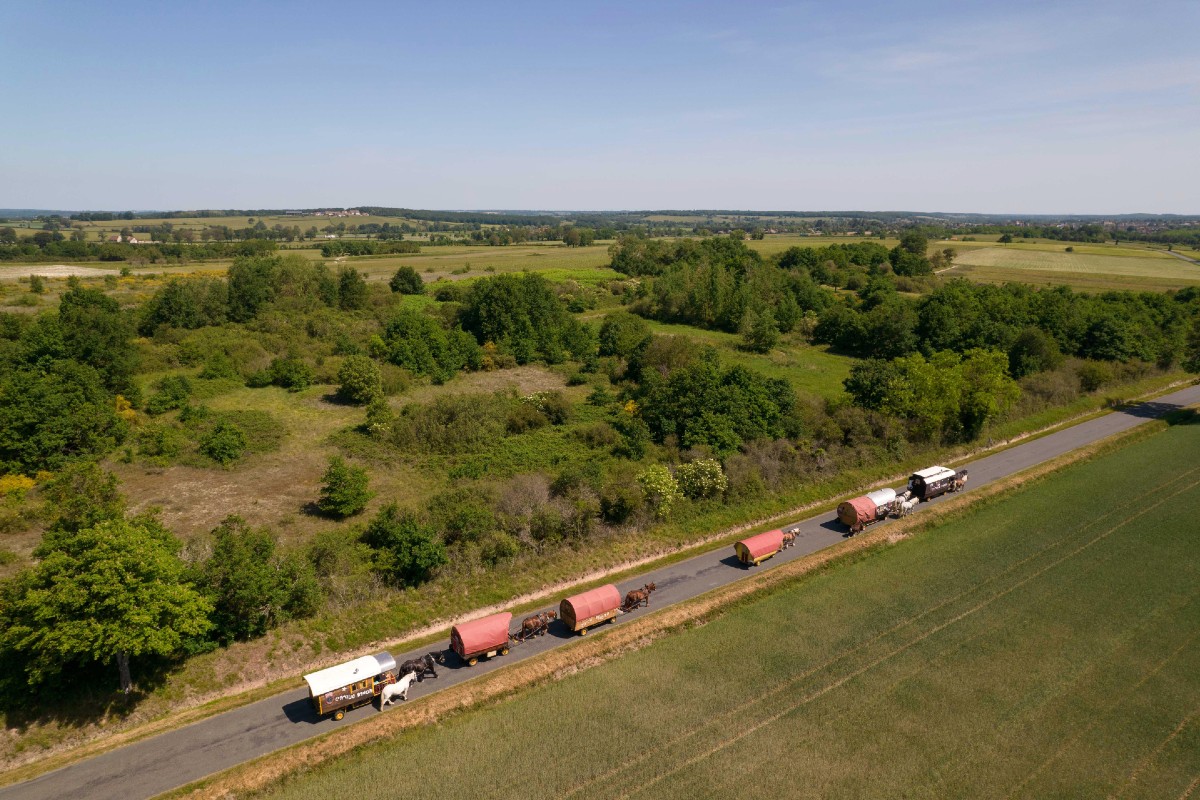 In trailers, they cover no more than 25 kilometers a day. © DR

“ We used to move like thisrecalls Daniele, 27, an accordionist at the Baidon Circus. It’s exciting, it’s long, it’s against the lifestyle “ordinary” where to go fast. Here you have to plan a day to move from one city to another. This limit imposes a healthier rhythm on you, you are more in the present moment. » “ We black out, artists love the people that come to us confirms Luna, a 28-year-old balloon gymnast. This is a small bubble that moves at the speed of hooves. » 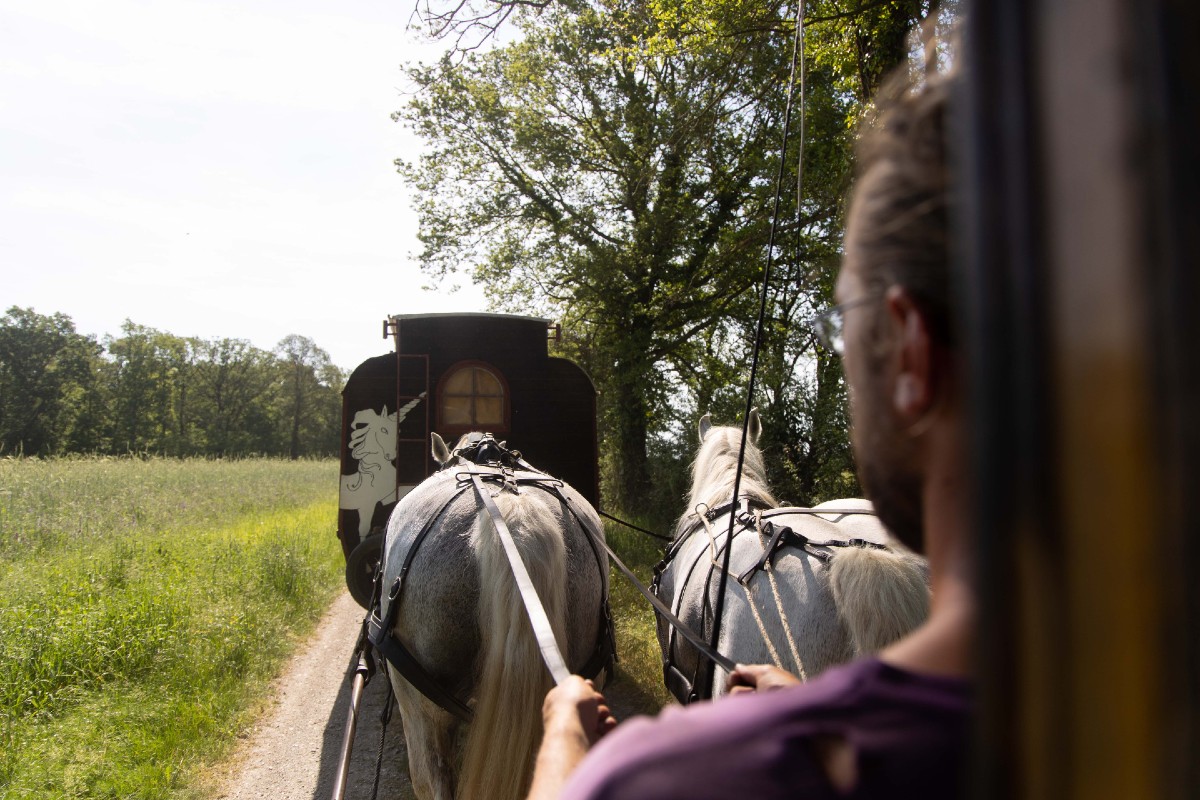 Unfamiliar with horses, the Circassians had to learn how to manage them. © Mathieu Genon/Reporterre

At twelve o’clock sharp, after a few hiccups – a mare that was free on the road, and a caravan that almost fell into a ditch – the procession finally reached Châtomeyan (Cher), a small town of almost 1,800 people. There the circus attracts all eyes. An elderly lady watches them pass in front of her window, a man leaning on the gate waves his hand to them, two women come up, take them off and greet them. “ We go where the people live »exposes François. “ I think it’s great to go places “lost”where not necessarily theaterviolinist Amandine, 32, abounds. We meet people we don’t usually see, from social strata we don’t usually associate with. He breaks down barriers. » 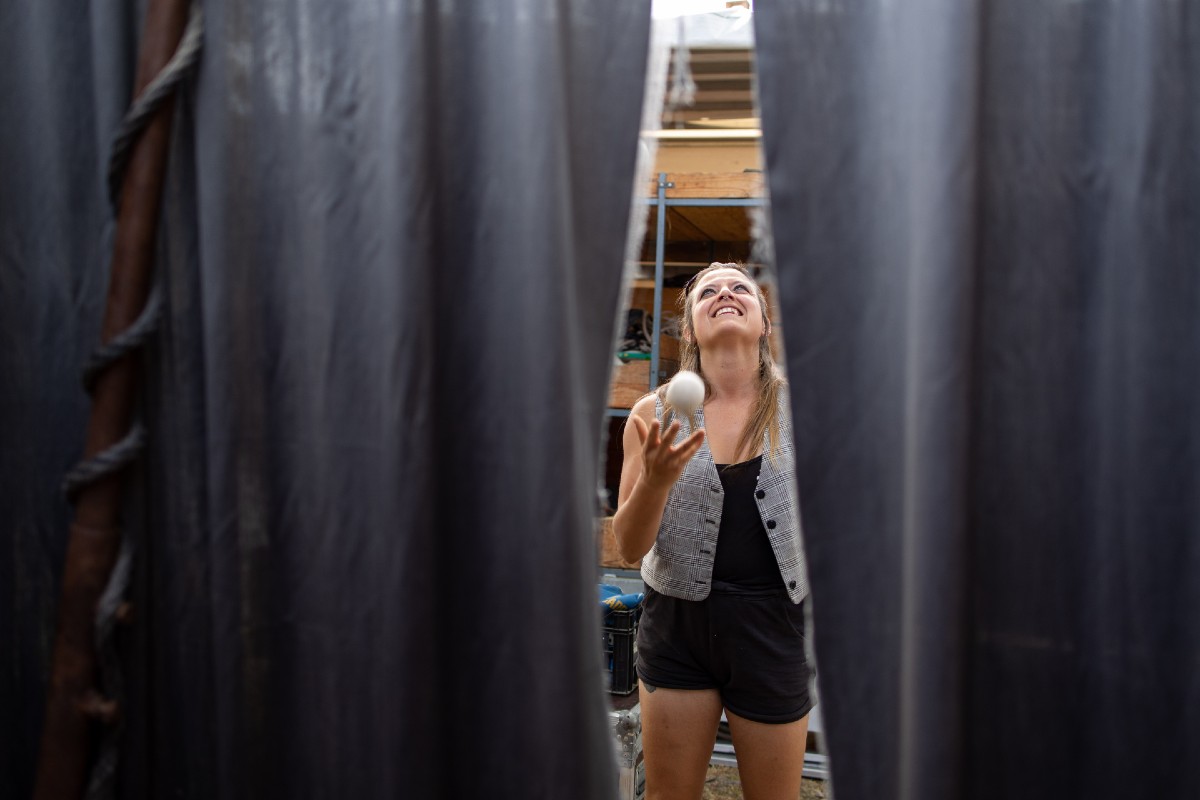 Once in front of the main square, it’s time to unharness the horses, set up the masts, rails, stands… The artists will live there in their trailers for a week before dismantling everything and heading back to Lignier (about 1400 inhabitants). “ In show business, it’s customary to drive 500 miles, play two gigs, and come home. regrets Ephraim the tightrope walker [1] 26 years. In these cases, we experience less presentation, less density. Everything is different here. » More than a hundred show dates in total – christened “ Everyone has their own dreams » are scheduled from May to September. 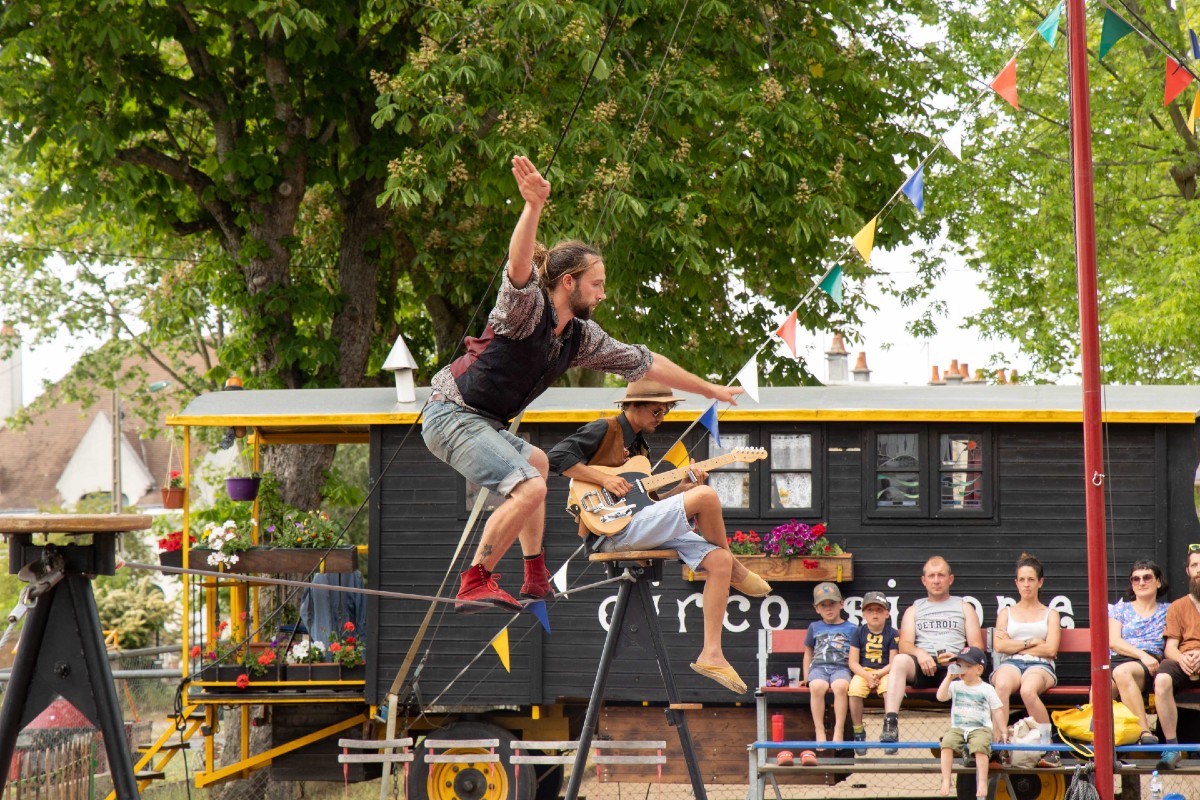 Cirque Bidon has over 100 shows scheduled for 2022. © Mathieu Genon/Reporterre

Live in the community

Until then, we’ll have to learn to live together on the road. In Cirque Bidon, unlike other circuses, everyone must participate. A month and a half ago, everyone was assigned a horse, everyone has to help with the housework, organize a circus, take it apart … It’s not easy when most of the members of the troupe have never harnessed a horse and climbed a tightrope. mast in their lives. 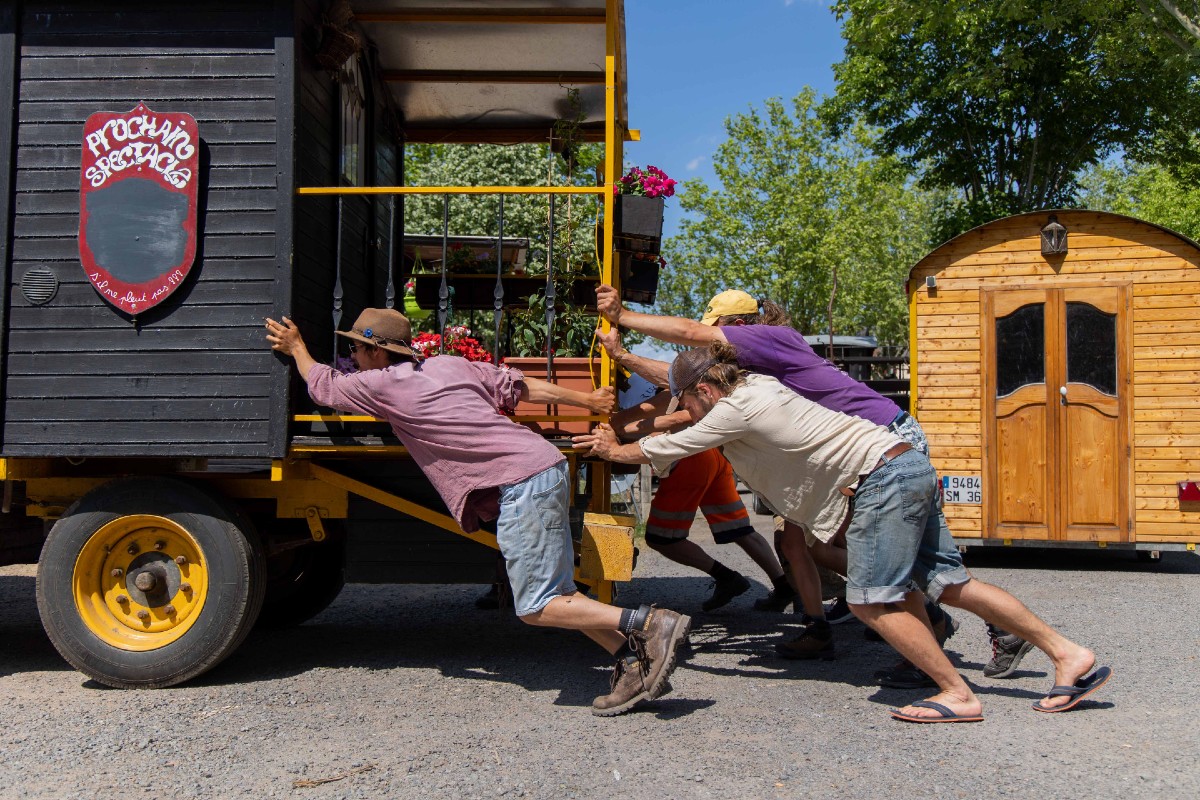 The beginning seems a little complicated, with bursts of voice occasionally coming out of the trailers. But the Circassians remain optimistic. “ We get to know each other to see each other’s limits. It will unite us »Amandine says. “ Thanks to this, we become professionals. The more we train together, the less stress there will be. »confirms Ocean, a 28-year-old juggler. 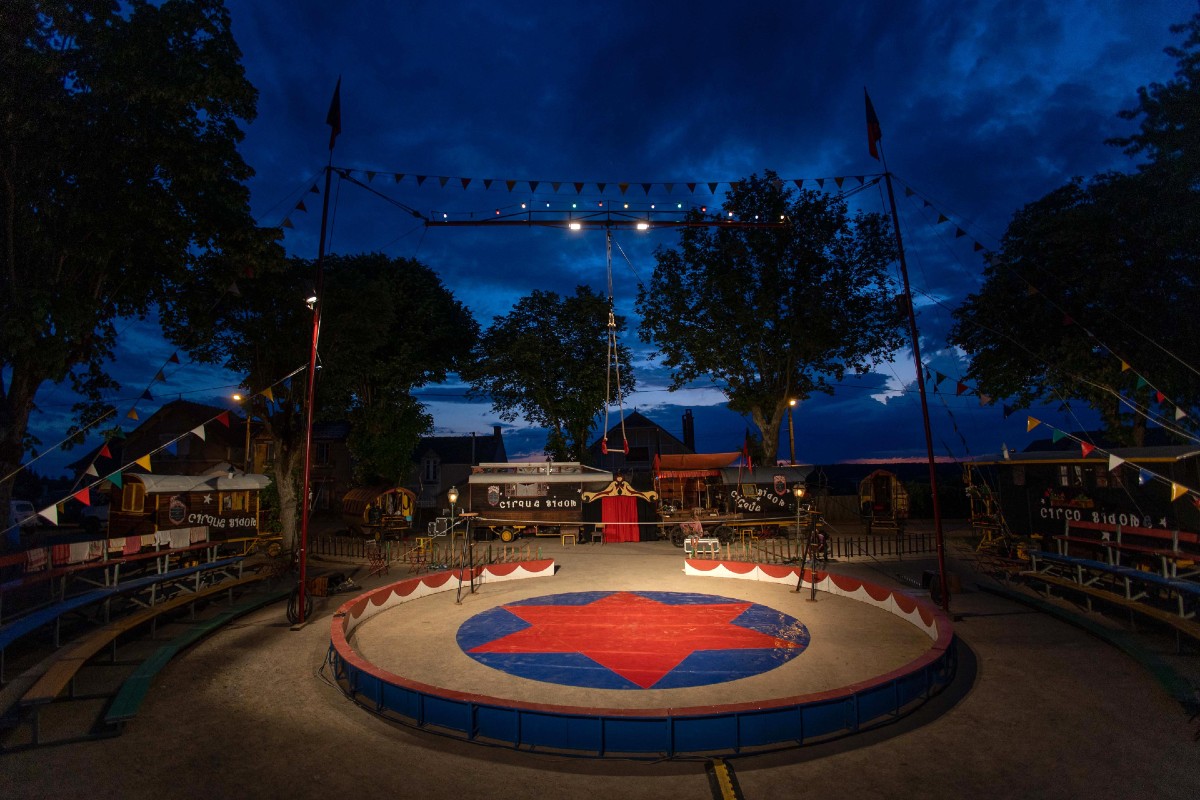 Bidon Circus installed in Chatomeyan at the end of May 2022. © Mathieu Genon/Reporterre

Before entering the track, all their obstacles disappear – as if by magic. In an infectiously good mood, the artists alternate horse aerobatics, wire, air hoop and small sketches – and all this is accompanied by live musicians. “ We offer people images that will make them dream, unexpectedly, without artificiality or special effects.Francois says. The goal is to take people with you. » The formula seduces: at Châteaumeillant, young and old say they are seduced by the image. And, perhaps, even more than that, the universe he proposes. Some of them point to the trailers with glowing eyes. As if they too dreamed of going on a journey. 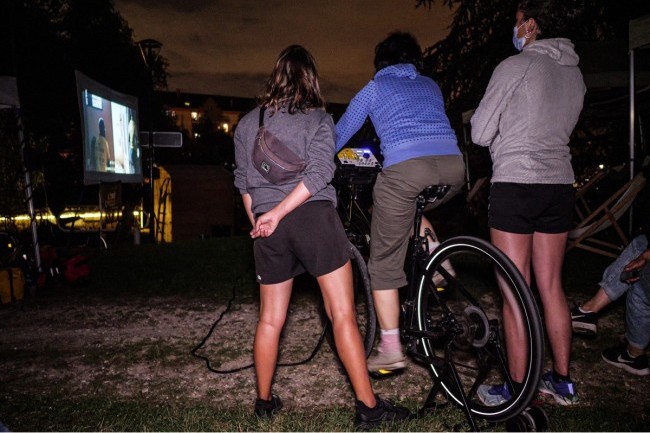 Ride a bike to watch a movie: Opening an eco-friendly cinema

[1] A tightrope walker is an acrobat who walks on a tightrope about 2 meters above the ground.