The oldest known heart has just been discovered in a 380-million-year-old fish fossil discovered in Australia. The big surprise is that although this organ comes from a very distant ancestor, it is not that different from a human.

In Australia, scientists have discovered a perfectly preserved three-dimensional fossilized heart and other internal organs of ancient armored fish. This discovery provides insight into the evolution of the body of vertebrates, including humans.

The researchers described the heart, the organ that pumps blood through the circulatory system, in fish called placoderms, an extinct species that was one of the first vertebrate jawed or jawed vertebrates. Placoderms lived from the Silurian to the Devonian, between -440 and -358 million years ago.

The discovered specimens lived on a tropical reef about 380 million years ago, during the Devonian period. These fossils are 250 million years older than any known fish heart.

The fossilized liver, stomach, and intestines of these placoderms helped provide a better understanding of the internal anatomy at a turning point in the history of vertebrates, including fish, amphibians, reptiles, birds, and mammals. 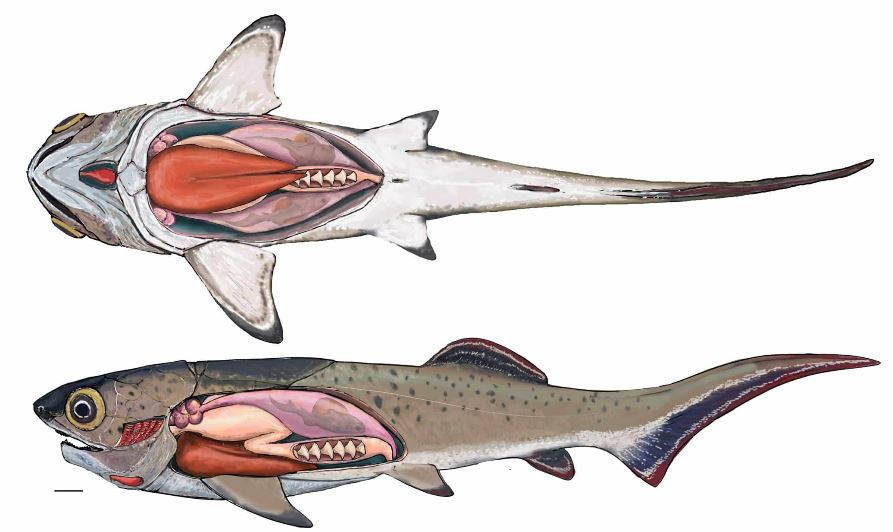 The anatomy of a placoderm fish is found in the Gogo Formation in the Kimberley region of Western Australia. Under the gills is the heart. Pale pink belly. The liver is marked in dark red. There is also an embryo – these fish gave birth to cubs and did not lay eggs. [Trinajstic et al. 2022 – Science]

The fossils were found at a site called the Gogo Formation in the Kimberley region of Western Australia near the town of Fitzroy Crossing. They are remarkable in that soft tissues, unlike hard tissues such as bones and teeth, are rarely preserved as fossils in a solid three-dimensional structure, but rather are flattened and therefore carry very little information.

“This site is arguably one of the most important fossil sites in the world for understanding the early evolution of vertebrates, including the origin of the human body,” said vertebrate paleontologist Kate Trinajstick of Curtin University and Museum of Western Australia, lead author the study published in the journal Science.

Known for their bony shells on their heads and necks, placoderms, according to Kate Trinajstick, represented “our earliest jawed ancestors”.

The recently described fossils belong to two species named Compagopiscis crocheri as well as Incisoscutum ritchiei, both about 25 centimeters long, with asymmetrical shark tail fins, jaws with teeth and sharp blades. Their heads were broad with a rounded muzzle.

Placoderms had a more complex heart than would be expected from primitive fish. It had an S-shape, similar to that of a shark, and consisted of two chambers: a smaller one on top and a larger one on the bottom. It was located at the front of the shoulder girdle in a position similar to today’s sharks and bony fish.

Its structure differs from that of later vertebrates. Amphibians and reptiles have a three-chambered heart, while mammals and birds have a four-chambered heart. The research team suggests that this made the animal’s heart more efficient and was a crucial step that turned it from a slow fish into a fast predator.

>> Position heart (in red) in an ESRF placoderm Gogo fossil:

>> The interior of a placoderm fossil with a heart (highlighted in red): 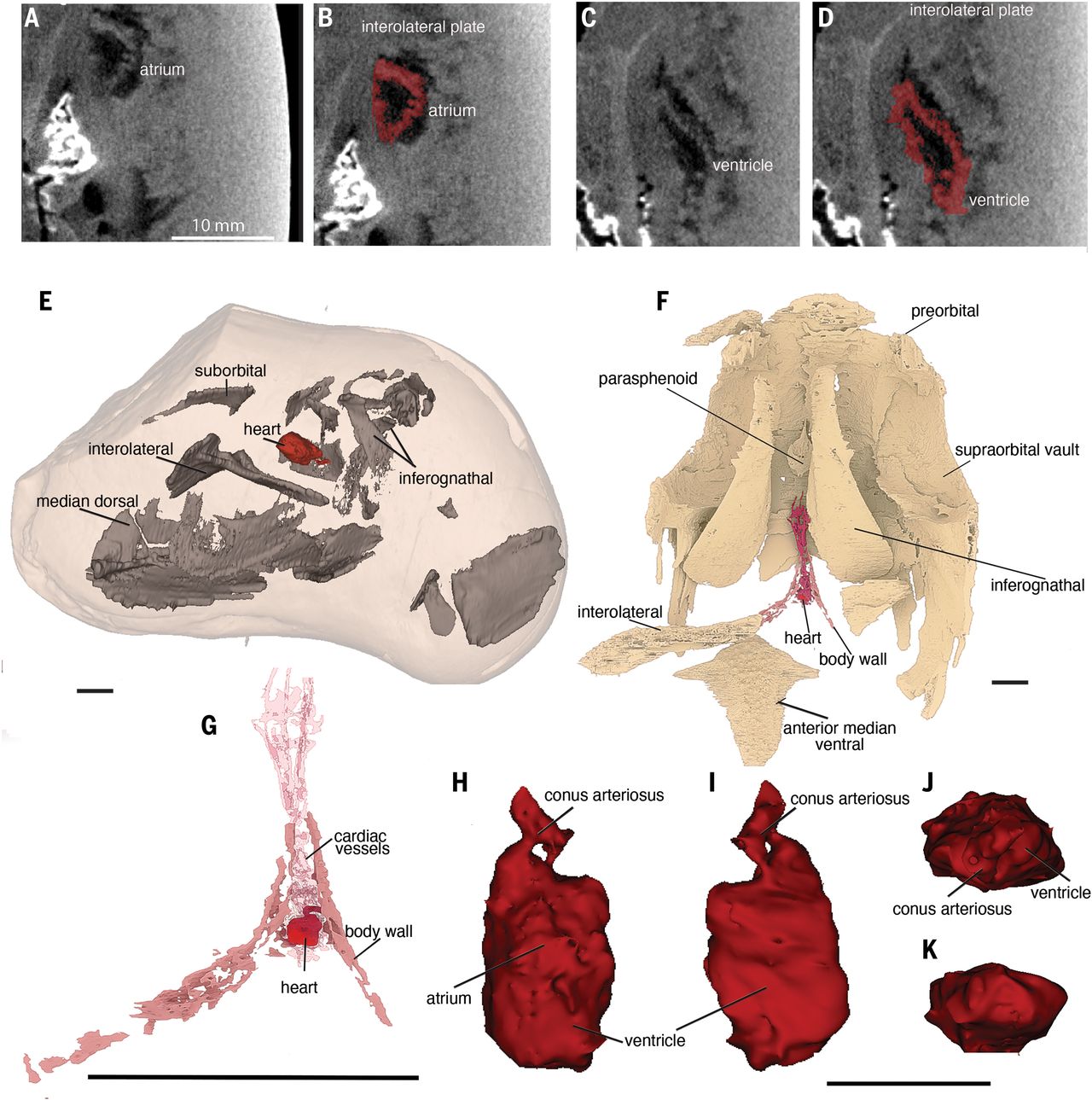 In terrestrial vertebrates that evolved from fish in the Devonian period, the heart moved further back in the body—or down from the point of view of a standing man or woman. If the human heart were in the same place as these placoderms, it would be at the base of the throat, in the center of the collarbone.

The liver of the placoderm was large and allowed the fish to swim, as sharks do. The liver shows how placoderms have evolved compared to the organ arrangement of jawless fish. In this species of fish, called lamprey, the liver is pressed against the heart and envelops it from behind. In placoderms, separation of the heart and liver was observed, as in modern jawed vertebrates.

The stomach of placoderms, which looks like a flattened sac and is somewhat rectangular in shape, has a characteristic thick cellular structure of the walls, apparently representing a glandular tissue. The intestines have spiral valves that facilitate the absorption of food. There is no evidence that these animals possessed lungs. 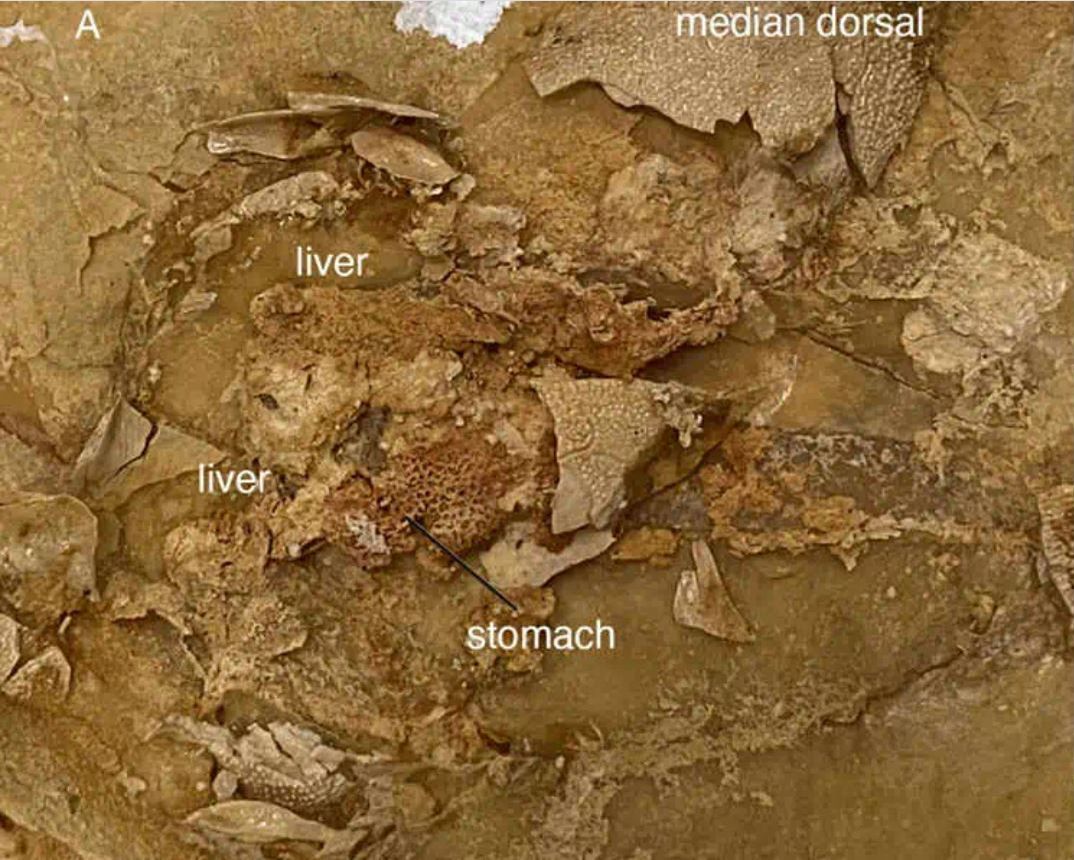 Gastric and hepatic walls of the placoderm, as well as the dorsal median. [Trinajstic et al. 2022 – Science]

The Importance of Soft Anatomy

The most important step in the evolution of vertebrates was “the transition from the ancestral jawless state, reflected in modern lampreys and hagfish [ndlr. des animaux aquatiques anguilliformes]into a vertebrate body with jaws,” says paleontologist and study co-author Per Ahlberg from Uppsala University in Sweden.

“Today, the vast majority of vertebrates belong to the group with jaws: sharks, rays, bony fish and all terrestrial vertebrates, including humans. This transition affected not only the evolution of the jaws, but also all sorts of changes in soft anatomy – for example, the evolution of the stomach and the movement of the heart in the throat area, ”he said.

“But while fossils give us a fairly complete picture of the evolution of the skeleton, equally important soft organs usually do not fossilize at all, which means that we have to guess at the details of their transformation in the course of evolution,” he added. Per Alberg.

These observations, made using modern imaging techniques such as neutron beams, would not have been possible just a few decades ago.