Knees on the ground, hands on the ground, Ethan concentrates on the bush he’s planting. The teenager tamps the ground, checks that the roots are firmly planted, waters. Around him, other little hands are busy. Young plants line up one after another: wild pear, wild rose, black currant, gooseberry, hawthorn, white shadberry. On bare trunks, the buds are still waiting for the right moment to hatch. “ We alternate a low bush and a tree that will grow tall »describes Sebastien Nottele, coordinator of the day, project leader of the League for the Protection of the Birds (LPO) of the Upper Loire. “ Having both low and high density will allow the hedge to act as a windbreak. »

In mid-April, the sun finally shines on the Haute-Loire, a light breeze refreshes its ardor, the blue sky is punctuated by rare clouds. In the middle of the tree-lined meadows, there are five young people between the ages of 16 and 17, along with their leaders. Those who dropped out of school participate in a special youth support program. [1]. The program includes participation in a hedge planting project organized by LPO. Seventy trees, one per meter, are to be planted at the edge of the municipal garden and orchard of Freisenet-la-Tour.

The mulching technique consists of covering the soil with organic, mineral or plastic materials to nourish and protect it. © Moran Kerinets / Reporterre

Some residents of the city also came to the rescue. Manon Mouret, first mate, grabs the plant: “ Between the roots and the future trunk you have a collar. When you plant, it should be flush with the ground. »

“ First when I was told earth, trees I felt it would be hard »comments Leah, 17 years old. “ But to save the animals, I’m always there. » She retained the main goal of the operation: replanting hedgerows to help protect shrikes. 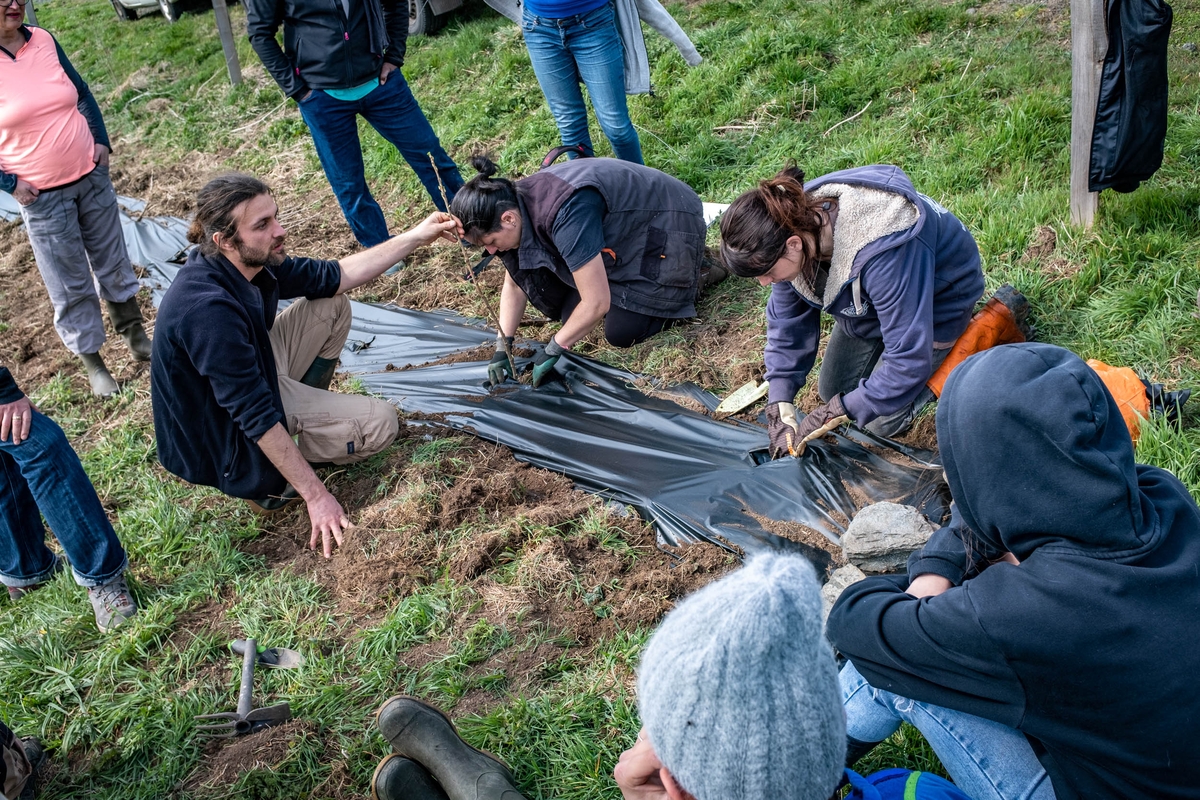 “ Since the 1960s, there has been a sharp decline in the population as agriculture began to intensify. », laments Sebastian Nottel. The shrike particularly enjoys an environment that alternates between hedgerows, groves and flowering meadows: it nests in trees and perches on the edge of open spaces to prey on insects and voles. Size from 17 to 26 cm depending on the species, with a black mask over the eyes, a curved beak, the bird looks like a small predator. And an amazing habit: he sticks his prey on the thorns of trees. A way to make them easier to cut or build something like a pantry called “ pantry ». This is also a migratory species, arriving in our latitudes for nesting only in spring, with the exception of the gray shrike, which is also present in winter.

But the disappearance of hedges and trees in the meadows, as well as the insects on which it feeds, have made it an increasingly rare bird in France. Six species were present until recently in metropolitan France. [2]. There are only five since last year. Rose-chested shrike (Lanius minor), no longer nests with us. Next on the list might be the gray shrike (Lanius excubitor), listed in the Red Book of France as endangered. The National Action Plan for Shrikes counted just over 1,000 pairs of this species in 2021. 85 % of them live in the Massif Central. 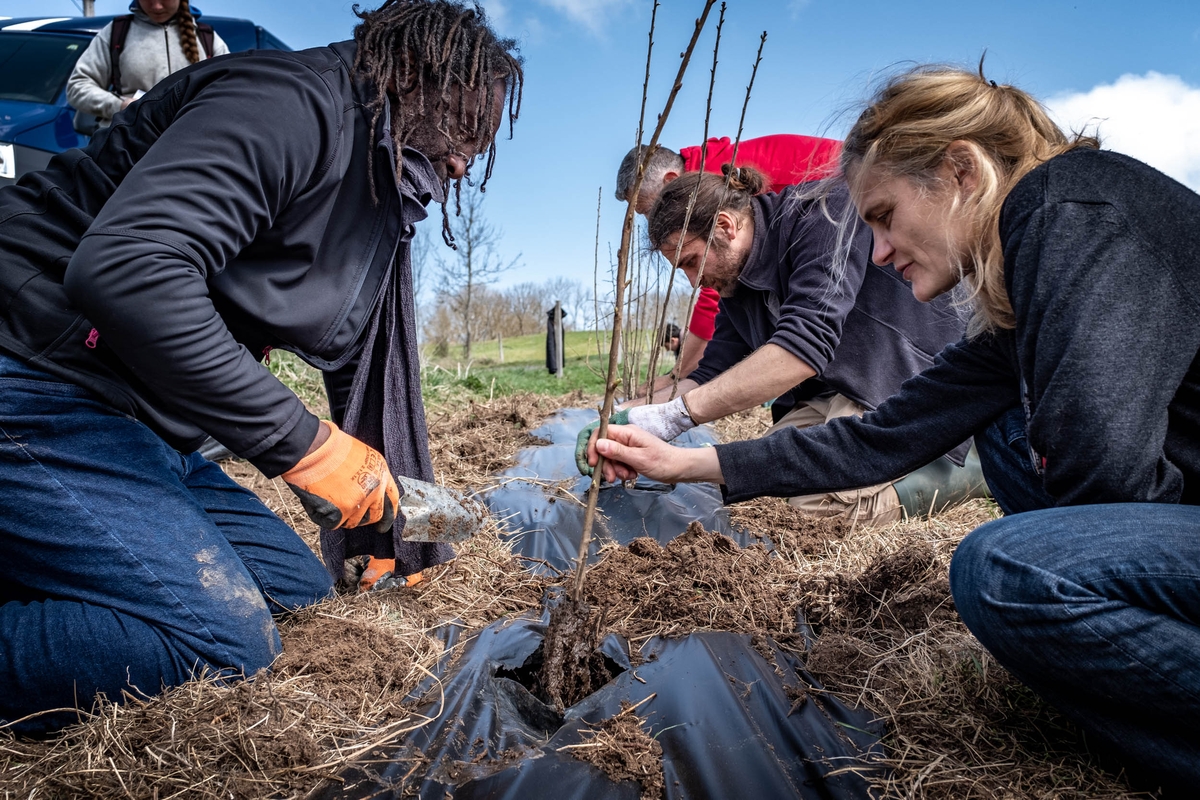 Several residents of Freyssenay-la-Tour came to help with the site. © Moran Kerinets / Reporterre

Thus, the Aura region is at the forefront of shrike conservation. LPO Auvergne-Rhone-Alpes concentrates its action on three species living in its territory: gray shrike, red-headed (Lanius Senator) and flayer (Lanius Collurio). The latter is not yet considered threatened. Her sisters are less suitable: “ The Gray Shrike and Rufous Shrike are suffering from a sharp decline in their numbers as well as an alarming reduction in their ranges. »explains LPO. The gray shrike is found almost exclusively in the Massif Central, “ breeding almost all over France ». As for the red shrike, “ we are seeing a contraction to the southeast lasting about a century, with a clear acceleration since the 1960s. »

Trying to stop the fall LPO Auvergne-Rhône Alpes has a whole program, primarily for farmers. Limit plastic waste that suffocates chicks when it enters nests. ; reduce the number of treatments for animals from pests “ since they are contained in cow dung, it kills the insects that eat this dung, and therefore becomes less prey for shrikes. »says Sebastien Nottele ; favor “ diverse grasslands in terms of their flora, hence the variety of insects, hence more food for birds »he continues. And above all, plant trees and hedges in the fields that are their natural habitat. 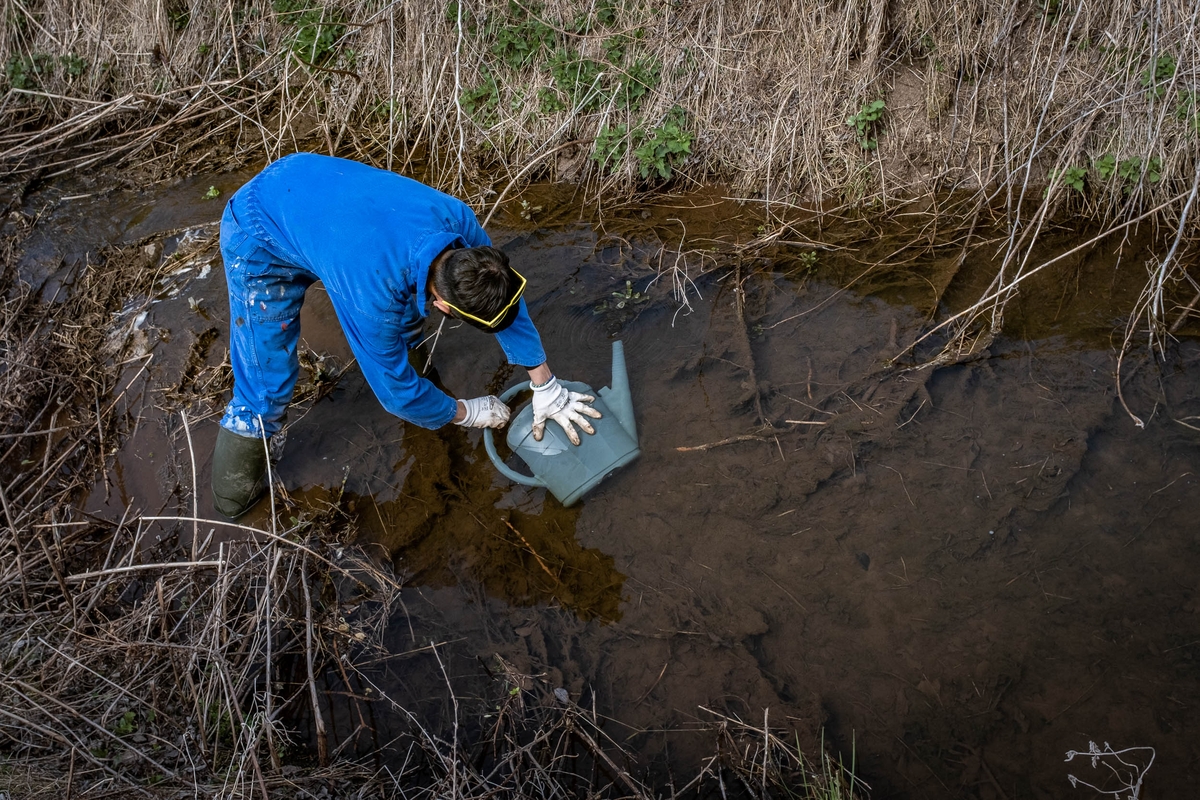 LPO contacts farmers and municipalities, provides trees free of charge, proposes species adapted to each case, and organizes the site if the farmer does not plant himself. This is how the municipality of Freyssenay-la-Tour requested it. The landscape around us still seems relatively well-preserved, the hedgerows are plentiful. “ But farmers see hedges as a limitation because they need to be maintained. »notes Manon Mouret, the first deputy of the commune. “ Here we are quite protected, but this can change quickly. It’s important to let everyone know [de l’intérêt des haies]. »

LPO skillfully emphasizes the agronomic interest of the hedge: windbreak, shade for animals, soil erosion control, refuge for birds of prey and other predatory voles invading fields… “ shrike is “umbrella views” »explains Sebastien Nottele. “ Conservation measures are being taken that benefit many other species found in these agricultural pastures. This is a good pretext for more global work on the conservation of the biodiversity of the agricultural environment. »

70 trees, one per meter, are to be planted at the edge of the municipal garden and orchard of Freisenet-la-Tour. © Moran Kerinets / Reporterre

For many animals, hedges provide shelter, habitat, or a place of movement that is protected from predators. The naturalist lists the birds: European goldfinch, yellow hammer, melodious linnet, serine chini. “ Everything is in decline », He says. Mammals: hedgehog, weasel, ermine. Reptiles: asp viper, green lizard. But also “ most amphibian species wintering in hedgerows or low walls associated with them, such as the common toad, spotted salamander. As for the largest birds, there is also a small owl, an owl that can nest in old hedgerows. »

“ If we don’t support them, they may disappear. »

So many species are stranded by the disappearance of hedgerows. We overcame 2 million kilometers of obstacles at the start XXᵉ century by 566,000 kilometers in 2006, the final study notes. It’s a 70 drop %. Clearing flourished in the 1960s-1980s, since then it has slowed down, and hedge uprooting is now strictly controlled. “ But there is unauthorized destruction, urbanization and aging of hedgerows. »notes Sebastien Nottele. “ If we don’t replant trees, if we don’t support them, they may disappear. » Therefore, he modestly participates in this painstaking work. From 2020 LPO planted 4.2 kilometers of hedges in the Haute-Loire at twenty different locations. “ And we can’t meet every requirement »he remarks. 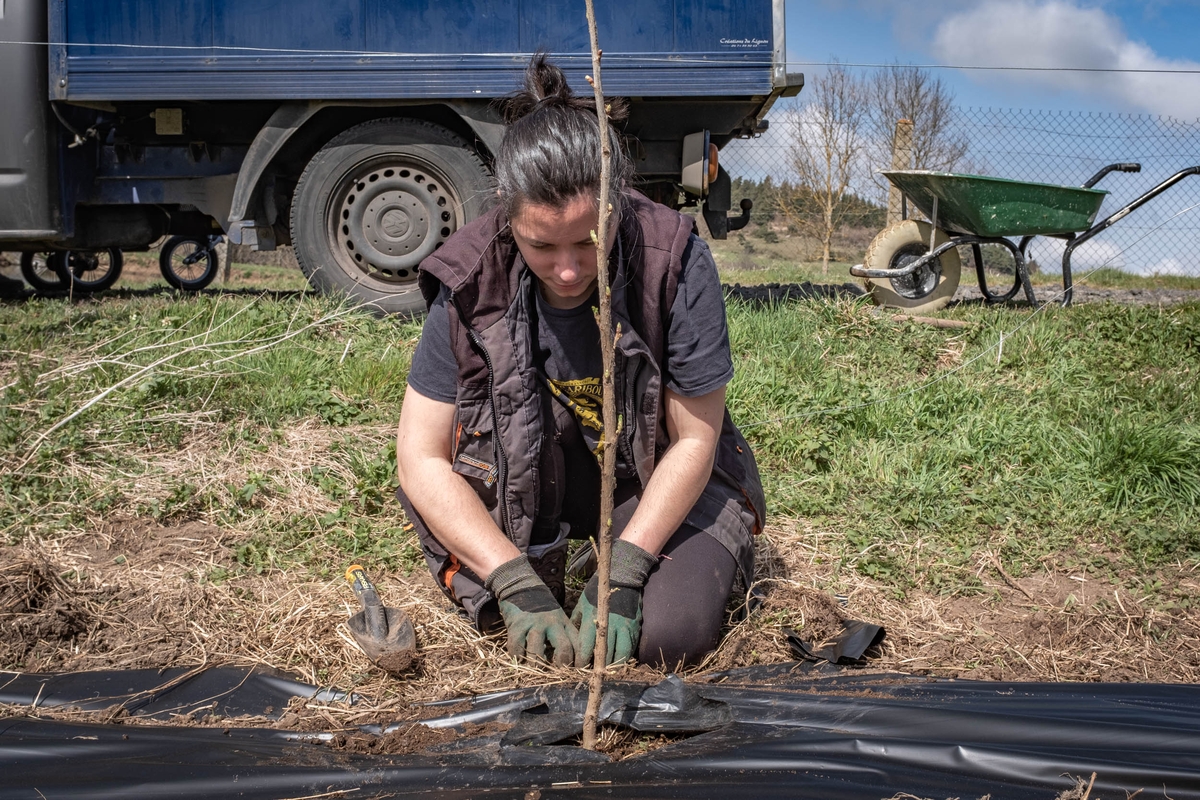 After planting, the bushes are stabilized with a substrate of straw and soil. © Moran Kerinets / Reporterre

“ I didn’t think hedging could be that important. »Leah admits. Boarding is fast. The second line starts at the edge of the garden. The motivation of young people is weakening. It’s interrupting, it’s teasing. “ Teamwork is what we love ! » Doniel laughs, dressed in a bright blue work suit. The teenager takes matters into his own hands, pulling up a tarp to keep weeds from growing at the foot of the young trees. Willows have been planted this time: we are on the bank of a stream. “ I like it because I like plantations, green spaces »he rejoices. His comrade Damien, casually leaning on a shovel, watches him work.

Heads up, contemplating the work done. Shoots are still stunted. “ You’ll have to go back to see when it’s grown », offers the young group Manon Mouret. Before the shrikes can be observed there, patience is needed: “ It takes four to five years to see the first results of hedges, and ten to fifteen years for them to fulfill all their ecological functions. »Sebastien Nottele says

Our report in pictures: 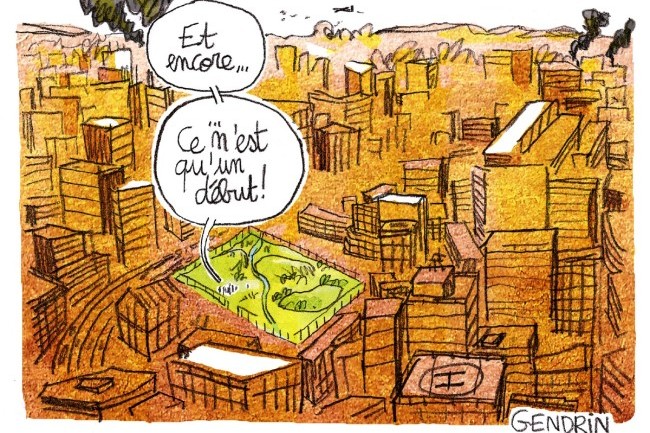 Fix nature: how to bring it to a new level ?

[1] It is a Challenge block (educational system for individual learning) dependent on the protection of children in the Haute-Loire.