Discover the most beautiful places to visit in Georgia, the pearl of the Caucasus that deserves its name.

A small state of less than 70,000 km², Georgia is not always the first destination you think of when planning your vacation. And yet, with the incredible diversity of its landscapes, the kindness of its inhabitants and the richness of its culture, it would be a real shame not to visit Georgia at least once in your life.

So, of course, we could do a quick overview of the country and visit its main attractions in a short time, given its modest size. However, such a mode of transportation would be contrary to the tranquility of its atmosphere and the way of life of its inhabitants and would not take into account the limitations of its mountainous regions. In our opinion, visiting Georgia is, first of all, time!

Strategically located between East and West, between the chains of the Lesser and Greater Caucasus, it is no wonder that the history of this country is so rich. Torn between a common history with Russia and a vision of the West, the Georgian population is evolving under various influences.

From troglodyte buildings to mountain villages, green valleys and sparkling Tbilisi, here are 10 of the most beautiful places in Georgia to visit!

Behind this original name, on the border of the Russian province of Dagestan, a province almost untouched by civilization. Thus, rare animals and plant species, unique in the world, have made it their refuge, and this is what you need to look for when visiting this part of Georgia.

There is no hurry here: the region, inaccessible for half a year due to the climate, is practiced mainly on foot and on horseback. The relationship between local residents and their visitors is not as obvious as in big cities. But all this is part of the charm of this attraction, so be sure to visit Georgia! 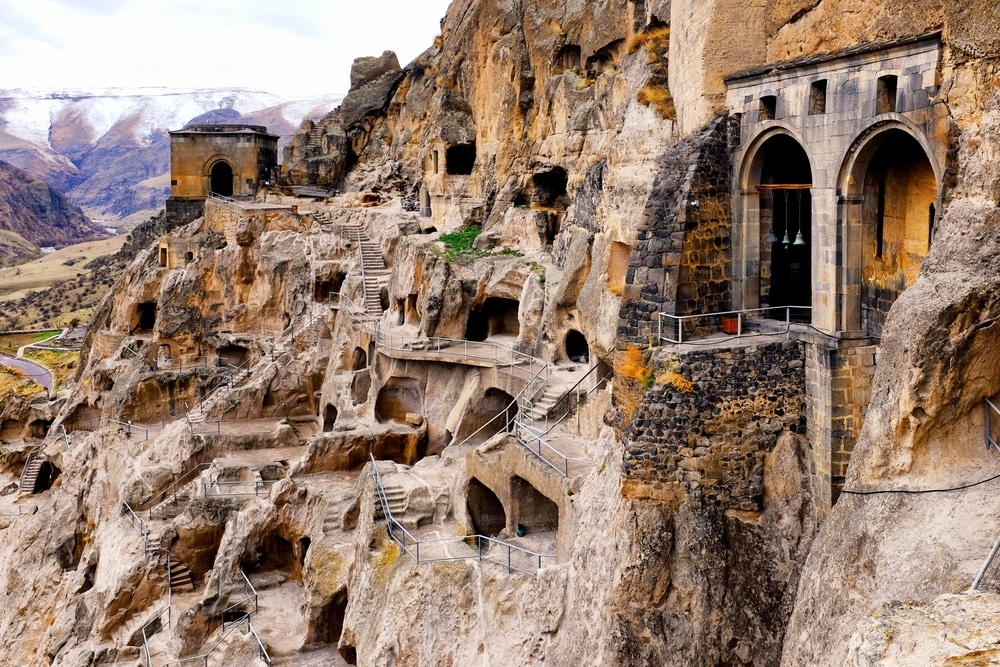 Near the border with Turkey, you can see the monastery, as well as curious dwellings dug into the slopes of Mount Erusheti. Built in the 12th century, this troglodyte complex was a real eagle’s nest that served as a fortress for the Georgians against potential troops from the south.

Indeed, once at the top, we share with them an incredible view of the valley of the Mtkvari River. The fascinating city of Vardzia can now be visited and is listed as a UNESCO World Heritage Site. In these caves, stretching along the slopes of the rocks, more than 6,000 hearths were found on thirteen levels. Probably one of the most interesting places to visit in Georgia. 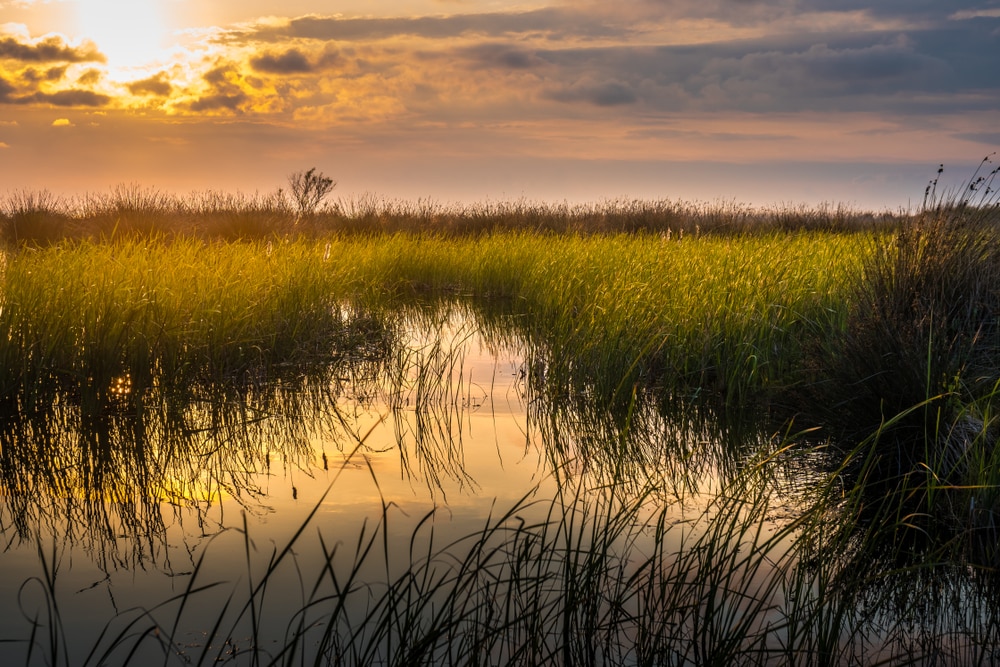 Colchis National Park stretches along the Black Sea coast and stands out for its wetlands, which almost resemble the scenery of rice fields. It was once part of the tropical zone of Eurasia, where the first Georgian coins are known to have been minted.

But if today we come to look for objects no longer, we find, in particular, the characteristic fauna in this place to visit in Georgia. All kinds of frogs, ducks and cranes live perfectly on its territory of 800 km².

Tune in to animal time and keep your eyes and ears open: you may well meet people you will remember for a long time while hiking in the park. 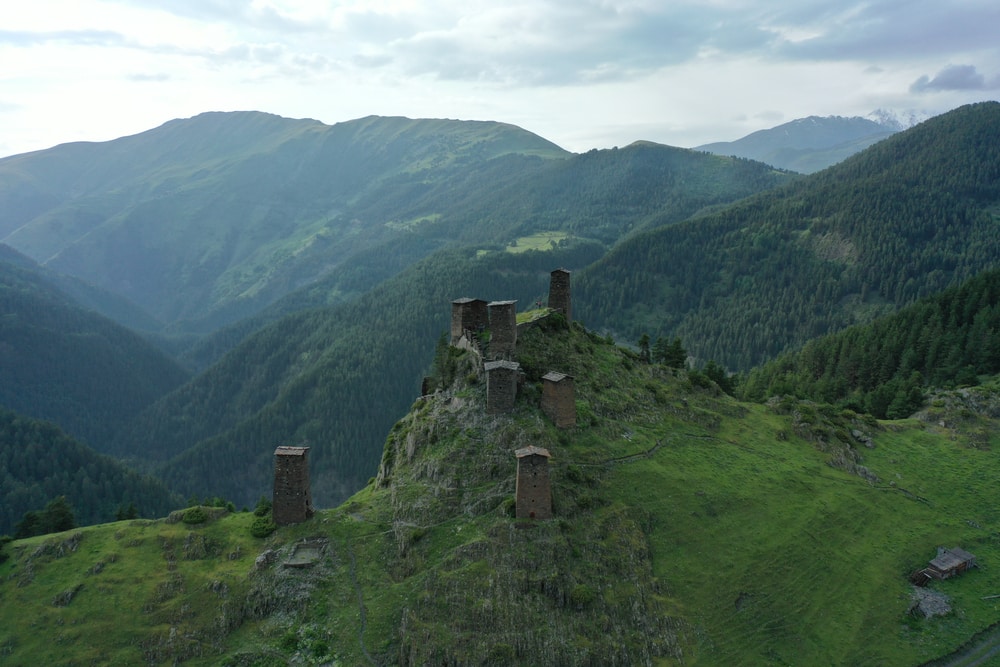 Even more remote than its older sister Tukhetia, Khevsureti is one of the most beautiful places to visit in Georgia and is full of a thousand secrets. Nicknamed country of the valleysits decoration of the rivers that flow and meander all the way to Russia fascinates us.

This mountainous region, like Tusheti, is subject to the vagaries of the high mountain climate. This region is very suitable for hiking and trekking: from the fortress village of Shatili, whose fortifications were built in the Argun gorges, you can get to the medieval crypts of Anatori.

They have a very unique history: it is a collective grave where, during epidemics, residents voluntarily isolate themselves so as not to infect their compatriots. Chilling and exhilarating at the same time. Ruined villages and farms are also waiting for you during your journey through the wonderful landscapes of Khevsureti. 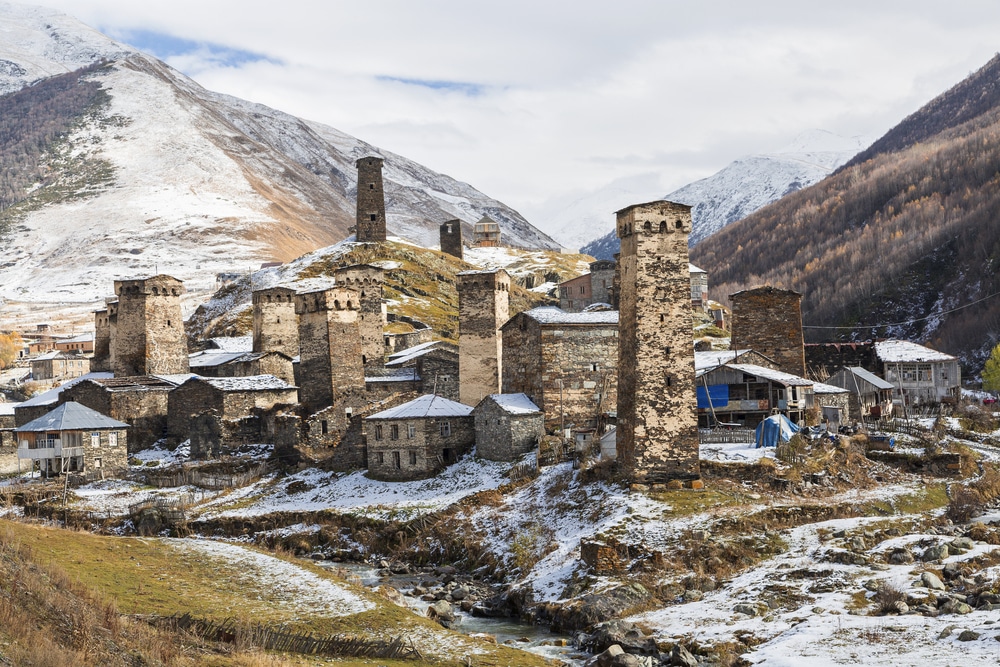 With a height of 2300 meters, Chazhashi is one of the highest settlements in Europe. Indeed, this hamlet still has a (very small) population. Located in Svaneti, it is nestled between the foothills of the Upper Caucasus and is one of the most beautiful sights in Georgia.

From Mestia, a passable path leads there, leading to the gorge of the Enguri River. Once there, we love to walk along the towers and rough stone dwellings of the Middle Ages, in which generations of men and women were born and developed.

We feel the weight of history in this place. The small museum also depicts the life of Georgians almost a thousand years ago, when people and beasts lived together. 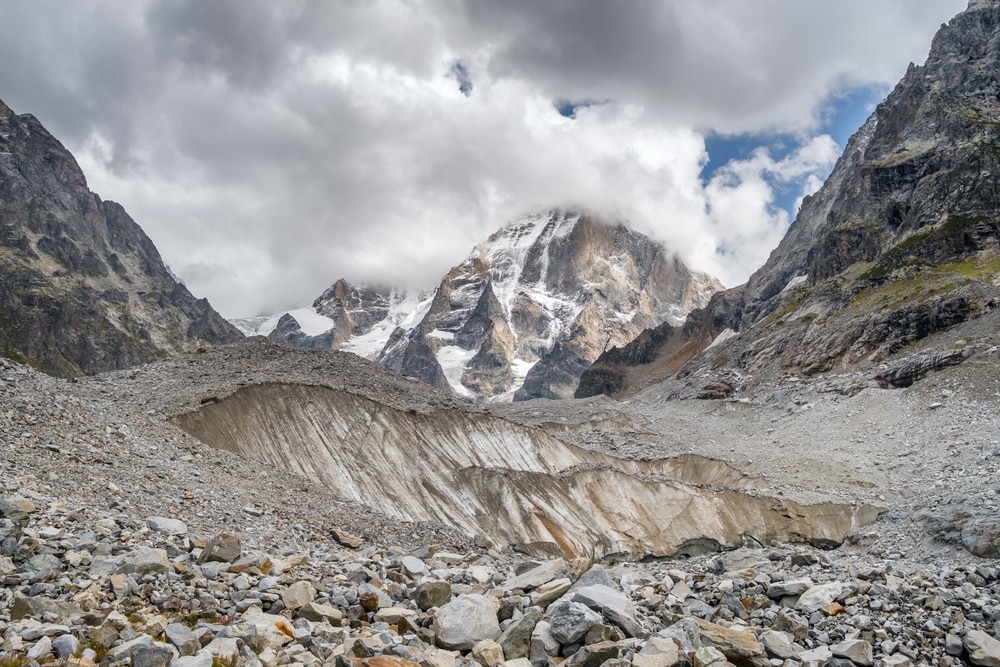 Probably one of the most famous hikes in Georgia is the Chalaadi glacier hike. We understand why, having trotted off the bridge and turned around in very beautiful nature, we come face to face with the long-awaited glacier. The round trip takes about three hours. However, if you want to walk from the city of Mestia, set aside six hours instead.

Starting from the main square of Mestia, it is impossible to go wrong: just follow the main road to the east. The bridge over the Mestiachala River will appear after about two hours of walking.

Then we will hit the road through the valley, enjoying the surroundings of the peaks, and then developing in the middle of the coniferous forest. Shortly after the moraine and between two mountains, a seemingly out of nowhere glacier marks the end of this unforgettable excursion. 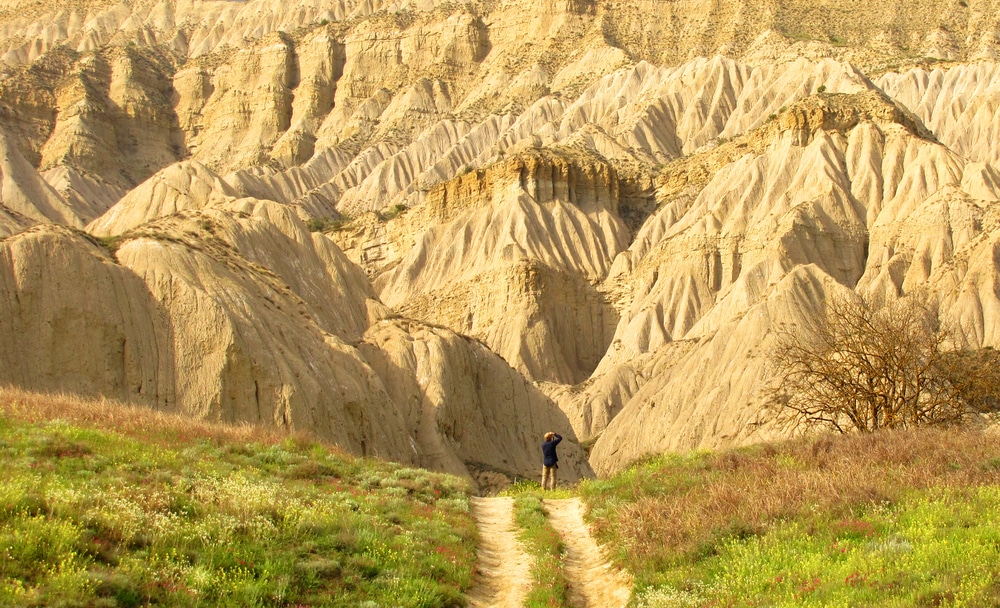 Vashlovani National Park is located near the border with Azerbaijan. At this place to visit in Georgia, pistachio trees, peonies and orchids hustle in a climate characterized by drought.

With over 100 bird species, 25 reptiles, 46 registered mammals, and many endemic plants in an area of ​​less than 500 km², it is no exaggeration to speak of an important biodiversity reserve by naming Vashlovani National Park. It is almost unbelievable to think that, walking along its paths, sometimes you can hear the cries of a lynx or the yapping of a jackal. 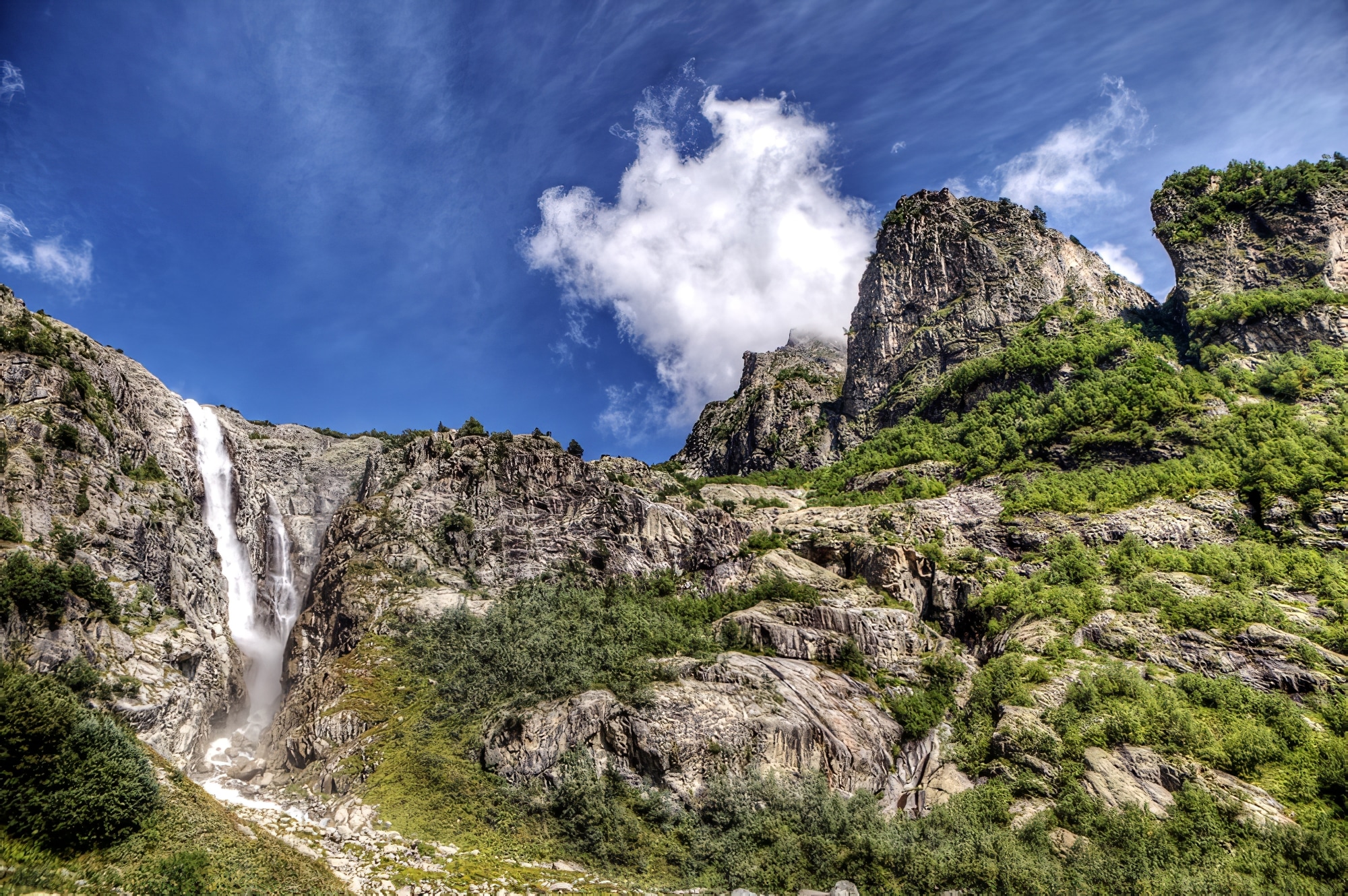 It is in Svaneti that we find the highest waterfall in the country, which makes the region even more beautiful than it is. To be able to visit this landmark of Georgia, we start from Mazeri and move along a path that crosses beautiful flowering expanses. The path is long but accessible.

If there is time, it is interesting to continue the road to the Ushba glacier in order to appreciate the beauty of the region even more. On the way, the peak of Ushba appears through the needles, opposite the peak of Tetnuldi. The legend says that it is about two lovers who, faced with an impossible love, prayed to become a mountain and saw that their wish came true. 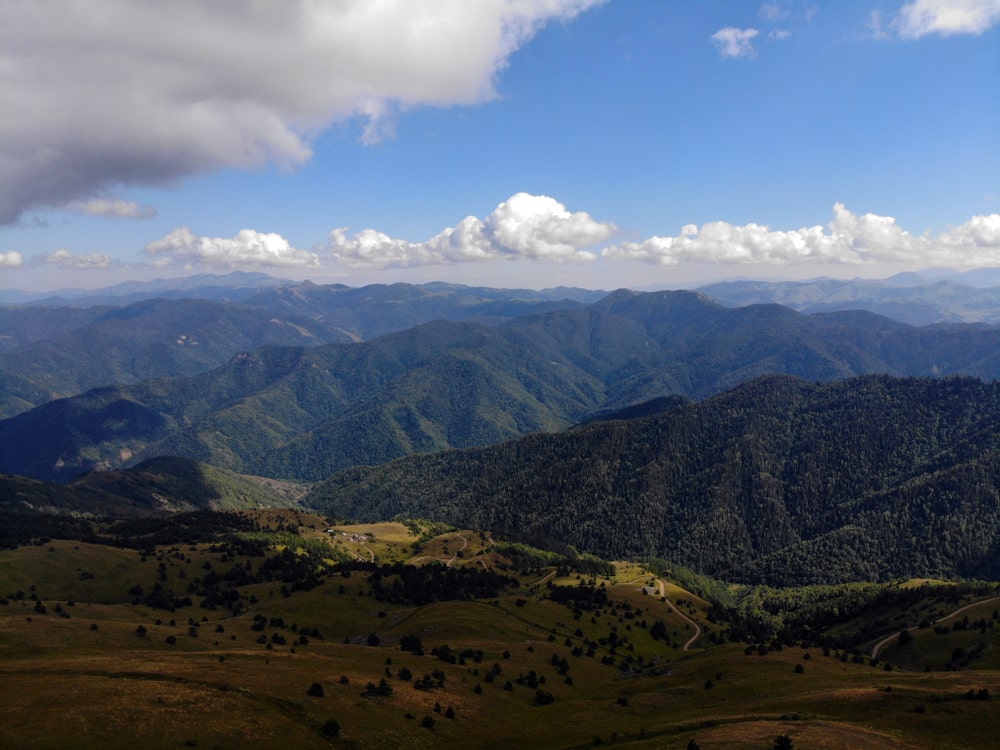 Borjomi-Kharagauli is certainly one of the most beautiful places to visit in Georgia, as well as the first national park created in this independent state. It is easily accessible from the capital, and coniferous and other deciduous trees inhabit its 6,000 hectares.

The National Park is a true journey inward, as it is home to a diverse fauna and flora, as well as a way of life characterized by their richness and diversity. We are surprised to take ourselves for an adventurer when we go to attack the doomed temple of Timotesubani, full of secrets, or the fortress of Vahani.

So many discoveries that the explorer will make to the sounds of the squeaks of rodents and the cries of endemic species of birds of prey living in this area. Luxurious photos and immortal memories are waiting for you! 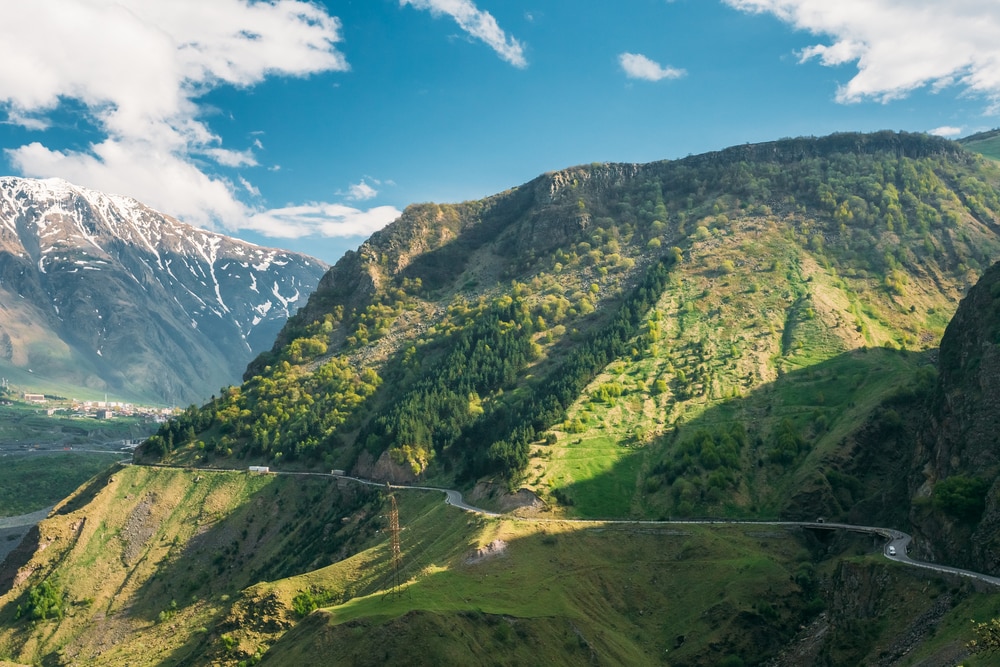 It will probably seem strange to you that as one of the sights of Georgia, you are offered a military road. And yet, it is one of the most famous and magnificent hiking trails in the country.

We will briefly tell you his story. Georgia, of course, has not always been independent. During its annexation to Russia in the early 19th century, the Russians undertook its construction in order to borrow it to cross the Upper Caucasus.

Even today it is the easiest access there. Snow ridges tearing up the sky, forgotten religious sites and glaciers follow each other and intersperse the path. In a word, a real pilgrimage and one of necessarily from the country.

We hope that this article created beautiful images in your mind and made you want to visit Georgia!